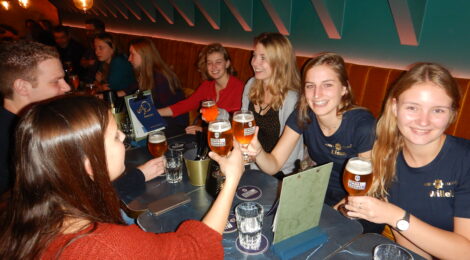 Last year some older students complained because there was a freshmen committee but not a special committee for the older students. So, the board came up with the idea of introducing a new committee: The Olden Goldies (OG) committee! After I joined the Lustrum committee last year, I still wanted to be active this year. And since I am one of the “older” students, I decided to join the OG committee. Together with Linda, Loes, Willeke, and Marieke we form the first OG committee! Text by: Lisan van de Gevel

The OG committee consists of five members with experience so the organisation of the first event went very smoothly. In the beginning, we needed to decide which students were invited. We came to the conclusion that we indeed only wanted to invite the older students. So, for the first activity only fourth year and older Econometrics students were invited. Or, as Loes would describe it: “The ones who are still struggling to be taken seriously and still need to pass Statistics even though they already had four chances.”

Before we even had our first meeting Loes already designed a logo. The first draft was on the backside of a beer mat. But after some refinement everyone liked the logo and the shirts were ordered. To organize the activity we only needed one meeting to choose an activity and to make a division of all the tasks.

A few weeks later, on November 12, the first OG activity took place. Together with 30 members we went to Stadsbrouwerij 013. They have a special location: The Albatros, which is a boat in the Piushaven. We had burgers and some special beers on tap and we caught up with how everyone was doing. After the burgers and beers, most of the members didn’t want to go home already, so we went to the karaoke bar. Here, everybody shared their outstanding singing voices and some exciting performances took place. Some of them were more beautiful than others, but everyone tried their best. To conclude, it was a very successful first activity!

Next year on May 7, there will be a second OG activity. The activity itself is still a surprise (also for the committee), but we will make sure that it will be just as successful or even better than the first activity. We are looking forward to seeing you there!