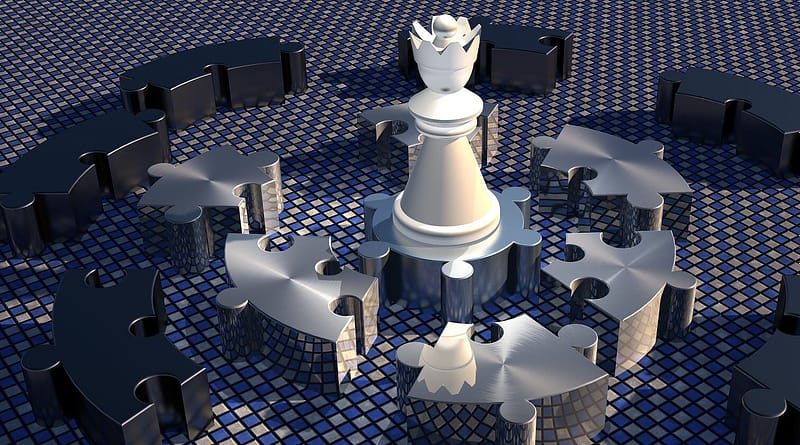 On a Friday afternoon, Stockfish and AlphaZero are playing chess. After a total of forty moves played by both, Stockfish is able to beat AlphaZero with a checkmate. However, you notice that something does not add up and you try to analyze the game that just had been played. Sadly, the game you just watched has not been written down correctly and almost all the moves done by a King (K), Queen (Q), Rook (R), Knight (N), and Bishop (B) are unknown. Luckily for you, there is only one possible game for the moves that have been written down and thus the game can be recreated. Written by: Patrick Floor

On the left, you find all the moves that have been written down by both players, where Stockfish is white and AlphaZero is black. All moves that contain a question mark are moves that are incomplete and need a Q, K, R, N, or B on the spot of the question mark. Fortunately, all pawn moves are given and therefore known. On the right, you can find the end positions of the chess game.

After figuring out the whole chess game you smell something fishy about it. At first, their moves look very normal, but the moves get stranger by the minute. It seems like there is a hidden message within the game. If you look even closer you notice how to decipher the message, at each turn you have a combination of two letters that had to be filled in at the question marks. A letter combination can be translated to a different letter with the use of a Polybius Square found below. Repeating this process for all the moves creates a sentence. Can you figure out what sentence is hidden within this chess game and find out what the two players were trying to communicate to each other?

To give you a head start, a few things should be known in order to solve this chess puzzle. First of all, the basic rules of chess can be found at chess.com/learn-how-to-play-chess. Secondly, the chess notation can either be found below or at chess.com/article/view/chess-notation. Finally, the Polybius square cipher. The explanation of this cipher can be found below or at practicalcryptography.com/ciphers/polybius-square-cipher/.

To decipher the chess game, you need to know a bit about chess notation. In chess, we have a total of six different chess pieces: King, Queen, Rook, Knight, Bishop, and a Pawn. In order to distinguish which piece has been moved, a letter is assigned to each piece except for the pawn. For the King this letter is a K, Queen a Q, Rook an R, Knight an N, and for the Bishop a B. To see to which square the piece is moving, the rows and columns of the board are assigned a name from 1 till 8 and a till h respectively. If we have the move Re1, this means that the Rook is moved to the square in column e and row 1. In addition, if there is already a piece on that specific square an ‘x’ is added to the notation, which means that in that move a piece of the opponent has been captured. For example, Bxc3, which means that the bishop has captured an opponent’s piece at square c3. Furthermore, if the move causes a check on the opponent’s king a ‘+’ is added to the notation. For instance, Nd2+ means that the knight is moved to square d2 and the opponent’s king is in check. Lastly, if the move causes the opponent’s king to be in checkmate a ‘#’ is added to the notation. For example, Qe7#, means that the queen is moved to square e7 and the opponent’s king is in checkmate and therefore queen to e7 is a winning move.

In exceptional cases, it is possible that a move can be made by multiple pieces. If this is the case, the starting column of the piece that makes the move is also stated in the notation. For example, assume the back-rank is empty except for two rooks. One rook is on a8 and the other rook is on h8. Then Rad8 means that the rook in column a is moving to square d8. Notice that this move can also be performed by the other rook, therefore, the ‘a’ is added to the notation.

In chess, there are two special moves, en passant and castling. En passant is a special rule that allows pawns to capture pawns on adjacent tiles under special circumstances and is denoted with e.p. behind the specific move if en passant is performed. Castling consists of moving the king two squares towards a rook on the player’s first rank and then moving the rook to the square that the king crossed. This move is written down as o-o.

A Polybius Square uses a 5×5 grid filled with all letters of the alphabet for encryption. In order to encrypt a message, each letter is replaced by its coordinates, row and column, according to the Polybius Square. For example, if we want to encrypt the message ‘hi’ with the Polybius Square found above we can do this as follows. H belongs to the row labeled K and the column labeled N, which gives us KN. For i, we get KR and thus the encrypted message equals [KN] [KR] 🡪 KNKR. To decipher a message, this method is done in reverse. Each pair of letters are the coordinates of the original letter. So (K, N) gives us h, and (K, R) gives us i. Which gives us the message ‘hi’.

Please enter your solution via the form below. A goodiebag will be waiting for whoever has sent the best (partial) solution. Please note that, as before, every recipient of this magazine is eligible to send in their solution, so members of the department are invited to participate as well. Good luck!