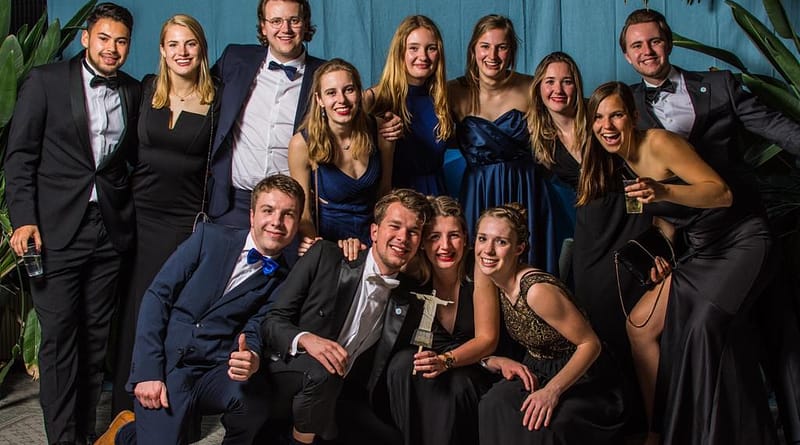 The time has come for me to write an article about how I have experienced my board year. As not a single day is ever the same, I thought that writing this article would be a piece of cake. However, nothing could be further from the truth. With an overload of memorable moments, it is difficult to decide what to put in the next 700 words. So I decided not to bore you with saying how great it was (which it definitely was though) because you can all imagine, but instead compare my expectations with reality.
Written by: Jelle Sieben

After being a member for over two years at our beautiful association, it was time for me to take the next step. Together with the Europe Trip committee, I organized a trip to Prague and felt that maybe a board year would be my next step. So I visited the board information session, after which I applied. Even though I was not fully aware of what was awaiting me, I thought I had a pretty good idea of what a board year would look like: A year full of parties and bonding with active members, but also making your best effort to take the association to the next level. It may be a bit of a cliché to state that your whole year consists of alcohol and hard work, but it has been proven to be 100% true.

My belief that a board year is not a 9 to 5 job turned out to be reality as well. During the day you have to fulfill your duties. When I’m asked what a typical work week looks like, it is always difficult to answer. Sometimes a week is just too short to finish your task list. There were days when I had to work until 9 or 10pm, order food and have a quick dinner at the rooms. But your day does not end after you clock out of building E, as I said, bonding with active members was a great part of the past year. There were lots of activities to make sure that I was never bored: committee dinners, drinks, active members’ days and of course our remarkable eighth Lustrum.

I have had the best time with all of the members, but when starting my board year there was one thing I had not thought of: I forgot that my board was not the only board starting their year on the first floor of building E. There were somewhat forty other motivated students about to dive into the same thing as me. I don’t know, but maybe this creates some sort of bond, unconsciously. Kind of memorable were the countless nights where the somewhat forty boardies all were standing together in the boeka. But even more memorable were all the extremely hungover mornings/days afterwards. I can honestly say that I did not expect the bond amongst all of the boardies to be so strong, and I am grateful that I was allowed to experience this. I met so many people and made a lot of friendships at Asset of which I am sure that are able to last a lifetime (including my girlfriend, hihi).

And now my board year is coming to an end. The new board has already been announced and the conveyance period has started. With almost every evening still being occupied by my duties as a boardie, I know that I am ready to end the year. The reality is that at some point, having a few more nights off would be nice. I have absolutely no regrets but fully dedicating yourself day in day out (and night in night out) can be quite exhausting. I still enjoy all of the moments but after a year, it’s been good. It is time for me to pass the baton and start studying again. But not to worry, I am sure that I will stay part of this association for many more years to come while I finish my studies. So I would like to thank my board, the other boards and mostly all of the active members for making this year one to never forget.

A day in the life of the girl with three functions

Life Besides a Board Year