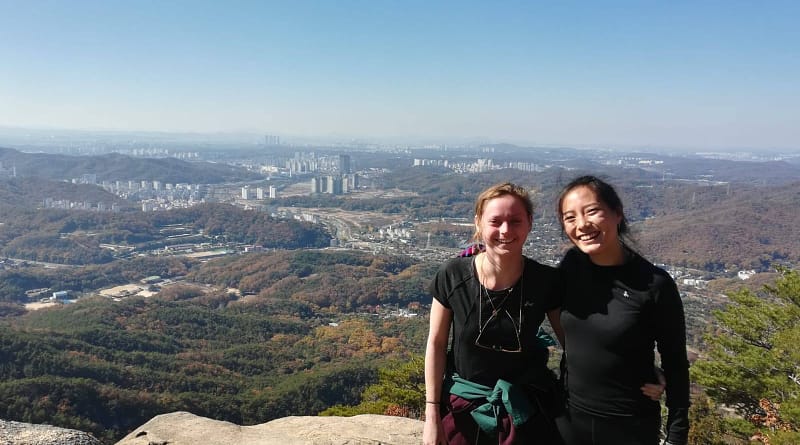 As my own board year is slowly coming to an end, I’m starting to realize how fast time has flown by in the past year. It’s already a year ago since Quirien, Jelle, Nina, Joris and me were trying to hide the fact that we were the candidate board (at which we horribly failed as we discovered later) to our active members during the Announcement Drink period. On Tuesday June 19, 2018 it was finally time for us to be announced during our own Announcement Drink in De Heuvel Gallery. From this night on, our board year really started to get rolling.
Text written by: Wenxin Lin

A summer with nine boardies in only one board room might get a bit crowded, but luckily I could join some of the summer conversations where I had the opportunity to have a look inside the offices of interesting companies and meet the people working there. During the summer it also was a challenge for our board to come up with a new policy and think of the goal we want to reach for the association in our board year.
The DMM in September was the time for us to present our policy and we were officially named the fortieth board of Asset | Econometrics during this evening.

Fast forward to mid-October, as the first period of our board year seemed to go by just as quickly. It was the week before the International Business Tour started and the committee was busy finishing the final details for the trip. This was the moment they had been living up to for more than a year, and also for me personally as I had been chairman of the committee during this year, before becoming coordinator as a member of the board. During this year many things happened for the organization of the IBT 2018, from choosing the destination to planning the activities and finalizing our participant booklet.

Monday night, October 22, it was time for our departure from Tilburg to Amsterdam from where we would fly to Warsaw, Poland. All seemed to be going well up to this point, but while we were waiting in the departure halls of Warsaw airport for our connecting flight to Seoul, South-Korea, the trouble started… When we unsuspectingly took a look at the screen with flights to see whether our gate number had already been announced, we were surprised to see the word ‘cancelled’ behind our flight. Shock and a little bit (and when I say a little bit, I don’t actually mean a little bit) of panic ran through my veins and I hurried towards the information desk together with one of the committee members. At the information desk chaos had started because of all the flights that were cancelled because of a strike, but luckily a very kind old man was helping us and doing everything in his power to get us on a new flight to Seoul, such that we could start our adventure there. In the end he managed to get sixteen of us on a flight to Qatar from where they would transfer to another flight to Seoul. The other seven (including me) were a bit less fortunate as our initial flight to Moscow, from where we would transfer to Seoul, had been delayed and we would not be on time for our connecting flight anymore. Therefore we had to stay the night in Warsaw and we would fly to Frankfurt the day after and fly to Seoul from there. Ironically Frankfurt is rather close to Tilburg, and knowing this, we would have been faster if we biked there!

Luckily Warsaw is a rather nice city by night and they had very nice and unlimited free carpaccio at the hotel where we stayed at the expense of the airline. We reunited with the rest of the group on Wednesday and we were able to enjoy the remaining part of our program in Seoul. ‘Enjoy’ may even be a big understatement for how I experienced the trip: it was an unforgettable adventure discovering the city and its surroundings. The city, the group, the activities, it was everything I could have wished for. I even met some interesting people there, which took a surprising turn 🙂 Definitely a highlight of my board year! And the International Business Tour 2018 was only the start of my adventure in South Korea. It turns out that I couldn’t get enough of this city, as I decided to go on exchange to Seoul in Spring 2020 – returning for some good memories and ready to make a lot more! (If you would like to read more about the IBT 2018 and our adventures in Seoul, have a look at the travel blogs!)

When I returned from the IBT it was time to prepare for the next challenge of my board year. At the beginning of the year I had set one goal which I wanted to accomplish: pass the beloved course Statistics for Econometrics. So instead of returning home during the Christmas holiday, I returned to my second home: the university library. Fortunately those long days in the library struggling through the course material together with my friends, who were going to make the same exam, paid off and I passed the course!

A few days after the exam I found out what my fellow boardies had been up to during the time that I was studying for my exam… Tuesday January 15 our semi-annual DMM took place after which we toasted on the new year during the New Year’s Drink at Café De Nachtwacht. During this drink the destination of the IBT 2019 was announced, namely… Mexico City! But this was not the only exciting thing for me this evening as it was also my birthday at midnight! Obviously we had to celebrate and my fellow boardies were even sweet enough to give me a ‘gifbeker’ (which I still enjoyed the day after…). On my birthday itself we had a date planned with the board of Asset | SBIT, another Asset department, at Quirien’s house in the evening. However, during the evening I wasn’t feeling too well because of the night before. But when I asked to stay at home some confusing things were said and I was advised just to come to Quirien’s house anyway. So, confused I went to Quirien’s house. When I entered the room I expected the board of Asset | SBIT to already be sitting there as I was quite late, but instead I saw birthday decorations hanging and to my surprise, not the board of Asset | SBIT was sitting there, but my friends! It turns out that all of them had been planning a surprise party and I didn’t have a clue. It still makes me smile when thinking about how nice it was!

On to the next and last highlight I want to mention in this piece, which is the lustrum week and for me the gala in particular. This evening was the end of an exciting lustrum week – something we had looked forward to the entire year. More than 120 people attended our gala in Villa de Vier Jaargetijden, amongst who were members, active members, former active members, plus-ones and more than 25 (former) board members (see photo). Some of the participants even attended our lustrum activities ten years ago! It was really nice to see that all these people connected to the association in the past years were brought together during this evening. I am already looking forward to our lustrum in five years and hopefully I will see all of you again as well!

I think this concludes me writing about my experiences in the past year, if I had the time it would be possible to write a whole book! During a board year you spend almost all of your time with the association, the members and the board. This means it’s a very loaded year, which might get difficult at some points, but it also means a lot of memories and unique experiences that you can only get during a board year. Besides that, the difficult times and struggles add all the more value to the whole experience. But of course the nice moments with members at our events, committee dinners and committee activities are what make the year worth it. Thank you to all the members who contributed to the past year for me! After having been a board member of Asset | Econometrics for a whole year, my time has been reached and I’m ready for my next challenge. I’m looking forward to finishing my bachelor and traveling to South Korea later this year!

A Change of Plans

A board year: Expectations vs Reality