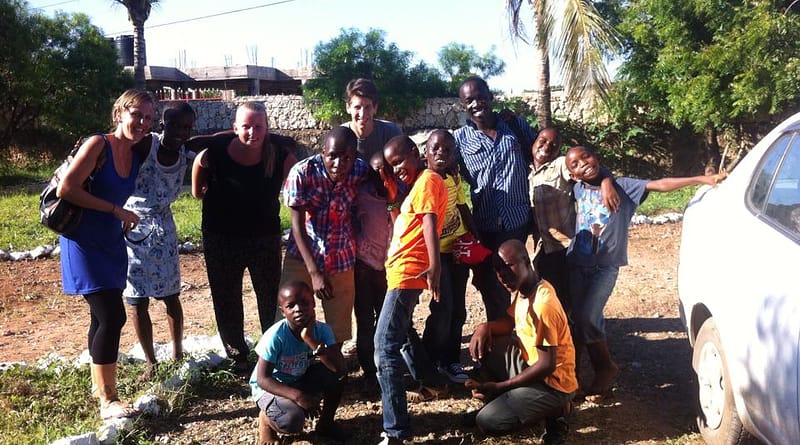 Many students who finish their studies decide to do something different before starting to work. Some decide to go traveling, some decide to do volunteering work, and some just decide to take a few months off. This is the story of Ad van Herpen, an ex-board member of Asset | Econometrics, who chose to do all these three things combined within one foundation: BeHoCa.

BeHoCa is a foundation, established only in 2012 by the 31-year-old Melissa Kreps. Melissa had been doing an internship in South Africa and had always felt a passion for the children living in Africa. Melissa: “I have lost my heart to Africa.” She decided to set up BeHoCa when she came across a boy in ragged clothes, who was eating from a garbage bin. Suddenly, Melissa realized that she knew this boy, as they had worked together until he ran away. Melissa started talking to the boy, after which he begged her to take him to the Netherlands and sent him to school. One can only imagine how depressing this must have been, and so this was the final straw that broke the camel’s back: BeHoCa was founded!

As such a young foundation, BeHoCa is still very much in the lift. Their goal is to offer the street children of Mombasa (Kenya) the opportunity for a better life, by giving them a home where they receive specialized assistance and support. However, in order to this, some external support is needed and this is where Ad comes in.

Ad, who started Econometrics & Operations Research in Tilburg in 2008, became interested in doing voluntary work when he was on exchange in the USA. As Melissa comes from the same village as Ad, he was familiar with the foundation and came in contact with BeHoCa’s board. Ad: “I immediately felt the right vibe and I knew that this was something I really wanted to do. Therefore, in September 2014, I traveled to Mombasa for three months to help with the project.”

Not surprisingly, the transition from The Netherlands to Mombasa is quite a big one. For Ad, Kenia’s climate was something he could not so easily get used to. Halfway November, it was some 35°C by day and approximately 20°C by night. Unfortunately for Ad, the temperature will only increase the coming months. Melissa, who has already been in Africa for one and a half years, has less trouble with adapting to its climate. However, there is one thing she misses quite badly: ‘frikandel speciaal’. Melissa: “I really miss the Dutch food.”
Ad: “Personally, I think the Kenyan kitchen is pretty good!”
Melissa laughs: “Yes, but Ad, you have only been here for three months. When you have been here as long as I have, you start craving for Dutch snacks.”

Besides these little inconveniences, there is of course a much bigger dissimilarity between Western-Europe and Kenya, namely the level of wealth. Ad: “What struck me the most here is the immense difference between the rich and the poor. One day when I was walking with the foster home boys to their school, we walked across the slum area and it was just so intense to see how poverty-stricken they lived.” Melissa agrees on this: “There are simply too many youngsters living on the streets, doing drugs, or robbing tourists to get some money. We from BeHoCa try our very best to reach out to them and give them a home where they are safe.”

Currently, BeHoCa homes nine youngsters, ranging from the ages eight to seventeen. Obviously they want to increase this number over time, but they first want to establish a stable environment. Melissa: “We are not the only foundation that has this mission. In fact, I have already worked for such a foundation before, where we were housing fifteen boys. However, after a while, there were only five of them left as the rest had all ran away. Obviously, this is something we want to avoid and therefore we are starting with a relative small number of inhabitants.” This is also the reason that BeHoca only homes boys and not both genders, as that would increase the foster home’s instability.

Working with these boys can be quite tough sometimes. Melissa tells us that while their oldest boy is currently a real sweetheart, he showed violent and criminal behavior when he was still living on the street. Melissa: “Now he would not hurt a fly and always offers a helping hand, but he actually robbed people by beating them up.” Most of the younger boys on the other hand have already come into contact with sexual assaults. However, for all them it holds that their greatest need is love and attention. Melissa: “When you give them that attention and you really get to know them, you see that every single one of them is a wonderful human being and that they all deserve the best possible care.”

Obviously, it takes quite some managing to realize such a foundation. BeHoCa has a board both in Kenya and in the Netherlands that each deal with different objectives. The board members working in our country take care of all the activities in the Netherlands, such as fundraising, the cashbook, etc. Besides the permanent board members, there are also several interns, local employees and volunteers working at BeHoCa. As the foundation is a non-profit organization, none of the involved receive any payments for their work and all of the donations are fully spent on their projects.

While there is an increasing trend in the amount of donations, the foundation still does not get enough money to realize their goals. Besides enlarging the foster home, Melissa also has some other ideas for the future. “I really want to start a project so that the older boys can have their own jobs. We could for instance establish a Bed and Breakfast, as many of the boys like to cook, so that they could work as chefs. Besides, I would also want to start a small poultry farm, so that we can generate our own income.”

As most of us can imagine, the transition from studying Econometrics to working with kids in Africa is quite a big one. Ad: “In econometrics you are used to solving problems in a clear structure and to finding a rational answer. What I have learned here is that there is not always one rational answer, as many situations can be dealt with in multiple ways. Doing voluntary work is really an addition for your personal development and I can recommend it to everyone.”

As Ad himself has also been on an exchange, he can compare doing voluntary work and going on an exchange quite well. “I think that for most students doing voluntary work abroad feels like a bigger step, but the plus side is that you do not have to take care of housing yourself, as you mostly do have to do when studying abroad. In either case you get to know a new culture, which is something you do not necessarily learn when studying Econometrics.”

In December, Ad will travel back to the Netherlands, after which he will start looking for a job. However, his view on the world certainly has changed. Ad: “This experience really changed my perspective on the Dutch culture, as you start to realize that everything which is so normal to us, is actually rather special.” Besides, Ad also mentions that because of this experience, he is more prepared to give people a second chance. “These boys have done quite some bad things, but here at BeHoCa we give them a new chance to prove themselves. I have learned that everybody makes mistakes and that this does not automatically make you a bad person.” Melissa adds that doing this work also makes you stronger as a person and that it is an experience that no one can ever take away from you anymore.

We would very much like to thank Ad and Melissa for their time and interesting perspectives. For those of you who want to make a donation, or are simply interested in the foundation, you can visit their website www.behoca.nl/en/.

The best year of your life

Looking Back at a Beautiful Board Year