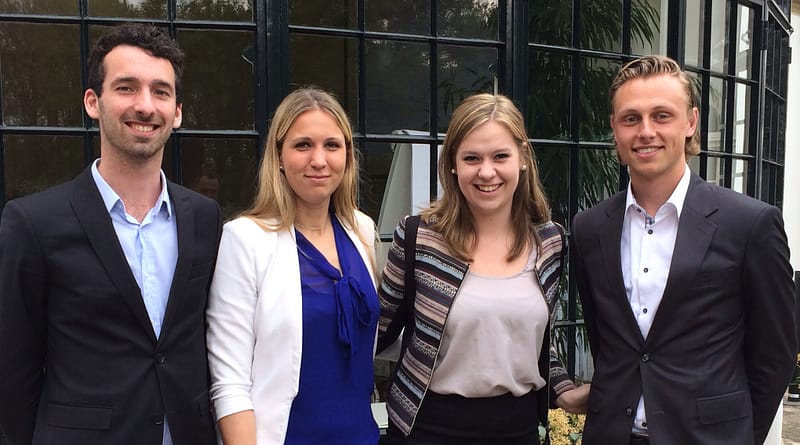 VSAE is short for “Vereniging Studenten Actuariaat, Econometrie en Operationele Research”. It was established in 1963 by a group of friends that wanted to do something besides their studies. Originally, the association was only based on informal activities. However, since twenty-five years, the study association also focuses on more serious matters. As Kasper states: “Everything starts off small.” The Bachelor in Econometrics is only offered in Dutch, but all Masters tracks are only available in English. As opposed to the three possible Master programs in Tilburg, the University of Amsterdam (UvA) offers five Master programs: General Econometrics, Financial Econometrics, Mathematical Economics, Big Data & Business Analysis, the Free Track and Actuarial Sciences & Mathematical Finance. They have actually recently dropped the Operations Research Management Master program. Quite obviously, Amsterdam is a much bigger city than Tilburg is, leaving us to wonder what it is actually like to live in such a big city. What do you think?
A: “Well, everybody thinks that Amsterdam is a really big city, which it is, but it actually seems smaller than it is. This is because everyone seems to know each other. Student life connects us and you keep seeing the same people around.”
G: “There are a lot of different people to meet and a lot of places to go. Of course, among these people there are some tourists as well, some easy targets to laugh at, or with.”
K and A: “What is also nice about the UvA itself is that it lies in the city center of Amsterdam, so you do not feel as if you are going to some remote area.”

One of the things that might repel people from Amsterdam are the high prices for the lodges. What I would pay for a studio here in Tilburg is the price of a regular room in Amsterdam. However, we were told that it is not that big of a problem. You can find a relatively cheap room via DUWO, but you do have to make sure that you subscribe quickly and that you do not set your hopes and demands too high. Kasper claims that the disadvantage simply is not big enough not to study in Amsterdam. Everything is just more expensive over there.

Even though VSAE does not have a specific hangout, they do organize their monthly drinks in one specific pub: De Heeren van Aemstel. The pub even opens especially for VSAE, as it is generally closed on Tuesday. It is however not the perfect place to go out, so therefore at approximately 00:30, some sixty to seventy people cross the road to go to some other cool café and sow their wild oats over there.

In contrast to Asset | Econometrics, you change boards at the start of February. What do you think are some advantages and disadvantages of this?
A: “Well, September is obviously one of the busiest months. You have to welcome all freshmen and such. Since we already have half a year of experience, it is much easier to accomplish this while still performing your actual duties. You are simply much more prone to make mistakes if you start in September and do not have that much experience yet.”
G: “One of the biggest advantages for me is that I only lose one summer. In your case, you lose two summers since you need to take care of two transfers. A disadvantage in my opinion is that you do start your board year halfway through your study year, but that is not so important as you can just continue your study afterwards.”
A: “We also do not choose the board ourselves, actually. We have a special “Searching Committee” to help us form the next board. This committee consists of Glenn and myself, members of the supervisory board and an external member.”

So why did you become active and more importantly, why did you choose to do a board year?
N: “People had often asked me to become an active member, but it took quite some time before I succumbed. Everyone around me was active though. At one point, one of my friends had to quit and I kind of replaced her. I joined the board of VSAE because I was tired of studying. Besides that I just found being active a lot of fun and I wanted to continue experiencing this excitement.”
A: “I met a lot of people during the Introduction Day of which most also became active members. I decided that I would become active too and joined the Party Committee. I enjoyed my time as active member a lot and it was a logical step to also do a board year. I knew everyone within the association very well after being active for two-and-a-half years. That is also why I chose to be responsible for Internal Affairs.”
G: “My story actually resembles Aletta’s story a lot. I also got into the Party Committee from the start and found it to be a lot of fun. I joined the board mostly because it is good for self-development with regards to social and personal affairs and because the VSAE is a great organization.”
K: “A friend of mine actually became the Internal Affairs at some point and convinced me to become an active member of VSAE. In the beginning, I did not enjoy being an active member that much, but I started to like it more and more over time. I liked it so much that I felt that a board year was the right move for me to make.”

Something that you may have heard of is the Econometric Game. During this event, participants are presented with a case, which they solve over the course of two days, after which the finalists are presented with a second case. The Econometric Game actually started off as a competition between the UvA and the VU (another university based in Amsterdam), but over the course of time, participants came to join this event from all around the world; from England to South-Korea, from South-Africa to Singapore. The unique thing about the Econometric Game is that the subjects are related to society and research, showing that econometricians are not solely focused on money. Kasper tells us that even though there is no prize for the winner, except for the coveted title of Econometric Master (year x), everyone is extremely zealous and fanatic, which does provide for a feeling of satisfaction.

After this interesting conversation it was time for Anouk and our esteemed interviewees to join the boards of the other Econometric study associations for the Board Integration Day. I would like to thank Nousjka, Aletta, Glenn and Kasper to free their schedule a bit for us and to let us in on all kinds of juicy details. I wish them good luck in their last months as the board of VSAE.

Where Math and Art Meet

The State of the Art of EOR