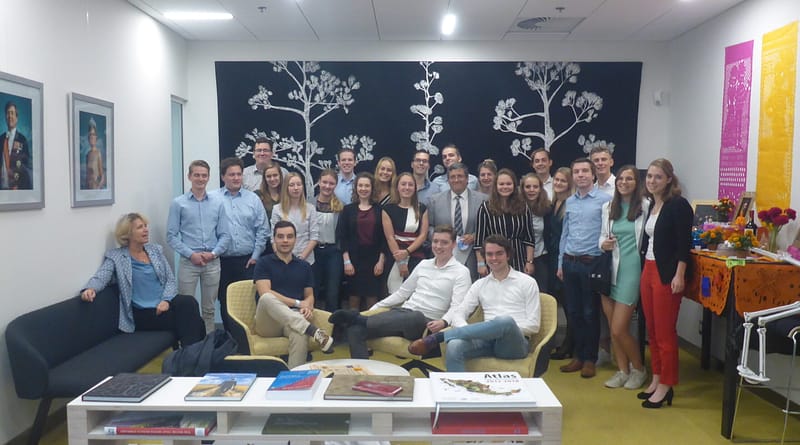 Last night we arrived approximately at 22.00 hours at our hostel in Mexico City (which felt like 5 in the morning for us and most did not sleep at all). As you can imagine we were all pretty tired of the travel and therefore we all went too sleep quite soon after a small walk in the area and a drink at our roof-top bar (yes, we have one at our hostel!) Written by: Joris Piree

After our first night at the hostel we all woke up in the morning to prepare ourselves for our first day of the business tour. At this first day we would visit the Dutch embassy in Mexico City and therefore we were picked up by taxi vans. Mexico City is quite a large city as you can imagine and therefore it took us almost an hour to get there.

At the embassy we were received by the Dutch ambassador seated in Mexico. She told us about her work at the embassy and how she tries to make impact on the Mexican politics. After her talk one of her colleagues took over and told us about the economic terms between Mexico and the Netherlands. Before we left, we gathered for a group photo and they showed us their special “Dias de los Muertos” corner, which is a little area with photos of people that died last year and a lot of decorations, foods and drinks to honour those people.

In the afternoon we travelled back to our hostel again, where we had some time to grab a lunch, but not too much as we were already running late. I went for some typical Mexican street food, of which I still have no idea what we ate, but it was really delicious. As our Spanish is not that great and the English of the locals is also not that great, it is hard to understand what you are actually ordering.

By the time we had finished our lunch we went to the ruins of an old Maya temple in the middle of the historical centre, named Templo Mayor. It was quite impressive to see what the Mayas build hundreds of years ago and even in a relatively short time. We ended the program with a visit at the Metropolitan Cathedral, located at the Plaza de la Constitución.

Once we were finished with our busy program of the day, we went to a nice restaurant, close to our hostel to have diner with the entire group. This was a funny place with live music by a Mariachi band and two dancers, dressed in a traditional dress. Some of us were even invited to join them for a dance.

To conclude, our first day at Mexico City was already a long one, yet very exciting. We had seen that much already on one day and still much had to come, like our hike to Nevado de Toluco and the celebrations of the Dias de los Muertos.