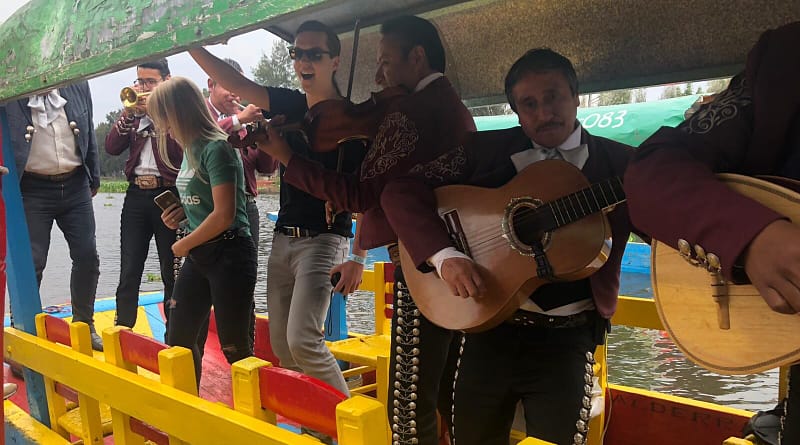 After a good night sleep, the second day of our Mexico trip started. During the day we got acquainted with the Mexican traffic, this is all about honking, yelling and claiming your place on the road. Thankfully we have our own taxi vans with personal daredevil taxidrivers who know all about the Mexican traffic.
Written by: Annabel Boers

In the morning we visited the Frida Khalo museum, also known as the blue house. Frida Khalo was an inspiring woman in Mexico during the first half of the 20th century. The museum actually was Frida’s residence and it demonstrated her extraordinary lifestyle.

After our visit to the museum, we went to the San Angel art market where we saw some amazing paintings about Dias de los Muertos (the day of the dead) among others. With three others I discovered an inside foodhall where various Mexican foodstands were present, they even had a Dutch Waffle stand with our famous stroopwafels! We ate some delicious tapas  and empanadas together with a lovely Mexican tempranillo, because lunch here in Mexico means it is past 5 pm in the Netherlands ;).

After lunch we reached Xochimilco to go on a gondola trip. Soon we were joined by another gondola which consisted of a Mariachi band. For only a few pesos they played Bas’ his favourite Mexican song. This was our first experience with the Mexican music and we all loved it!

During the boat trip a few beers were consumed which caused several full bladders. Seeking for a toilet during such a trip is not as easy as it sounds, but thankfully there was hope on doll island. Creepy baby dolls were hanging on the entrance of doll island and the only thing we wanted in that moment was a toilet.
Finally we found something that looked like a one. Some of us decided to go for the bushes, while others were brave enough to enter those primitive toilets. The Mexicans sent a young girl to collect money from us while we were peeing, it was an interesting experience. The trip was supposed to last 2,5 hours but we are in Mexico so it actually took us way over 4 hours.

On the way back everyone was exhausted and very happy to be back in the hostel again in around 30 minutes. But nothing could be further from the truth… Every road was blocked and eventually it took us more than 2 hours to reach our hostel. I think our time management will be heavily affected during this trip. Our way of forgetting time is just to sing lots of songs as off-key as possible. It is a miracle the taxi drivers are still smiling at us.

After all, I decided to get some sleep after my regular bedtime story for my roommates to be ready for the rest of our trip!