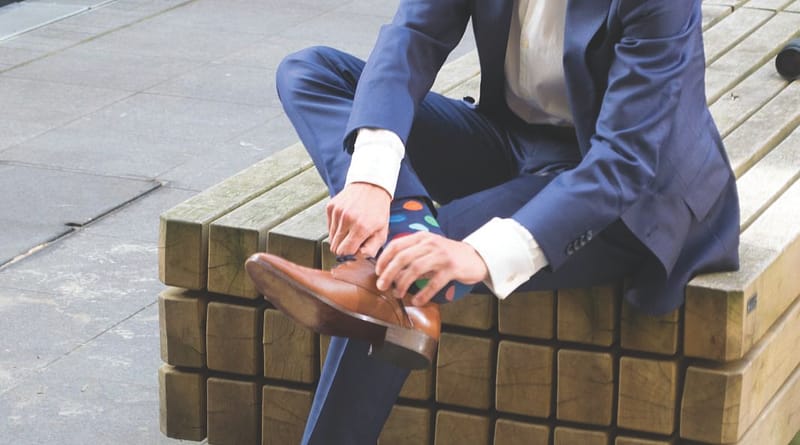 Setting up your own business, creating employment and producing a fair product; that is what JC Kappers is about. Inspired by years of voluntary work in Albania, Jaron Kappers (21) decided to set up a business in cooperation with former unemployed shoemakers from a small town in Albania. Text by: Janne Vos & Dirk Baltussen

Jaron is currently studying Econometrics and Operations Research at Tilburg University. He is finishing up the last few bits of his Bachelor, in order to start both a BAOR and an EME Master. During his studies and before, there were certain activities that kept him occupied. For instance, he has been an active member at Asset | Econometrics since he started in Tilburg and joined multiple sport associations. However, the item that he is definitely most inspired by and enthusiastic about is his voluntary work at Van Oost naar Oost (VONO).

VONO is an organisation that travels each year from the east of the Netherlands, Apeldoorn, to the east of Europe, which in this program means Albania. “My father has always been one of the supervisors this project, so ever since I was 12, I was yelling that when I would turn 16, the first thing that I wanted to do was to participate”. Indeed, this is what he did. When he turned 16 he travelled to Albania for the first time. After that, he returned every year to help people in need. The aim of the project is to help the less fortunate and to expand the vision and the heart of Dutch youngsters. Activities that keep them occupied are for instance organising activities for children, building up houses and other things. Moreover, each year there is a common purpose. “This year we built a play garden. The thing that is so warming is the amount of joy these small things bring to people. It regularly happens that when I am at university, one of the children sends me a picture or a snapchat of him/her playing in this play garden. Even with a relatively small action such as a building or a play garden you can already make a difference for them.”

It was during one of the trips to Albania that he and his father ran into a priest, Grigor, who became a good friend. They started talking and connected easily. The conversation took several turns and ended up discussing different projects in Albania. Five years later Jaron, his father and Grigor would like to set up a foodbank, something like the Dutch Voedselbank. This project turned out to be a great success last year.

They also want to do something about the unemployment. They did have several ideas to deal with the large unemployment like producing lavender soap or leather shoes. “The idea of producing leather shoes came up to me when I visited a slum in Albania. During my first year of voluntary work, I met a woman who made shoe soles and glued these to shoes. She worked for an Italian company and got paid very poorly. This definitely made an impression on me back then.’’

Jaron got the opportunity to present his ideas to the Dynamo Business Club in Apeldoorn. They thought his ideas were great and encouraged him to keep going with it. Moreover, they liked the fact that such a young person came with an idea like this.

As a result, Jaron decided to start his business. One of the first actions that had to be taken was to find people who could produce these handmade shoes in Albania.  Accompanied by Grigor, he found two shoemakers. Besides these shoemakers, he also employed an Albanian to put the logo on the shoes and somebody from whom they buy their leather. The first shoemaker has a really small shop and spends all his time making Jaron’s shoes. He currently delivers around thirty shoes per month. Due to the maximum capacity he faces, he is not able to produce more. “It is definitely hard to find a way to increase the amount of shoes I produce; finding new shoemakers in Albania may be a bit difficult, since many Albanian shoemakers moved to Italy to work for a company there.” Because of this, Jaron’s dream is to build a factory in Albania which produces large amounts of shoes. This would solve the problem of finding new shoemakers and provide people, who are not shoemakers, a job as well.

Once these arrangements were made, Jaron’s company was officially born. Under the name of “JC Kappers” he registered his company and started with his website. The name JC Kappers was chosen carefully. Jaron decided to give the company his own name. The reason for this is because he is named after his parents. “Without the support of my parents, I could have never done any of this.’’, Jaron states. Multiple shoe brands are named after a family name, so therefore it seemed like a good fit. Obviously, a brand is nothing without a logo. A creative friend of Jaron helped him design the logo. “The fun part was that, before he told me, I never realized that you could combine the J and the C into a K. Once my friend processed this in the logo, I instantly had a good feeling about it and decided that this would become the logo of my company.’’

However, nothing goes without setbacks. This is indeed something that Jaron could confirm. He designed the first shoe himself and then sent the design to a shoemaker in Albania. However, the first prototype turned out to not be the way he had expected. At that specific moment, he even shortly considered to quit. Nevertheless, he decided that one setback should not mean the end of a great idea. He continued working for his company and soon created the prototype shoe he wished.

The product that JC Kappers is selling is one type of shoe, available in both cognac and black. This model is named ‘’Fillimi’’, which is Albanian for ‘’the beginning’’. The model of the shoes is very neutral, since this is not very likely to get out of fashion soon and is wearable by many people. However, this model is just the start. Right now he is busy with setting up a model to create personalised shoes.

Via Facebook and friends Jaron has promoted his company. This way, he was able to expand his reach by a large amount, in only a short period of time. “At first, I did not expect it to get the amount of attention it eventually did. I was not really surprised when my relatives and friends made orders, however this changed; at a certain point I started receiving orders from people in the Netherlands that I was not connected with at all.’’ He got an advertisement on the homepage of pepper.com because many people liked his concept and suddenly people all over the Netherlands visited his site. This is one of the moments that Jaron would describe as the best so far. As Jaron is studying Econometrics at Tilburg University, he was already very familiar with Asset | Econometrics before this interview. Since his freshman year at university onwards, he was part of several committees at the study association and attended multiple events. For that reason, he was also well acquainted with the board members of this year. He was able to set up a deal with both men in the board. As a result, one can for instance spot the shoes of JC Kappers at the board photos of this year.

The vision of his company is to produce good and fair products. “It is a company after all, so I do intend to make profit. However, these profits do not concern the very big numbers. Moreover, the profit is mostly invested in the project again. My intention is that shoes should be bought mainly for this project after all.’’ One pair of shoes provides in total five working days in Albania.

All in all, the start of JC Kappers is promising a lot for the future. Of course, there are many steps that can still be taken. For instance, it is relatively expensive to send the shoes from Albania to the Netherlands. As a result, Jaron has picked up all the orders so far by himself. He has not been able to find somebody who can produce shoe boxes for his company, so when he is going to pick up his shoes, he takes his own bags with him. For now, this fits him; he is able to keep good personal contact with his shoemakers and it enables him as well to combine this with a small vacation in Albania. However, once the company will grow even further, there has to come a different solution for the transportation of his shoes. When Jaron was asked if this was his goal for the future, to solve matters like these, he replied that he was a bit more ambitious than that. ‘’In the future, I would love it to be able to set up an entire factory in Albania. In this way, I could produce more shoes. Moreover, this would also create employment for people who have different skills than being a shoemaker or something closely related to that.’’

Only two weeks later we got a message from Jaron that there were already new developments for his company. Besides the two shoemakers who live in the inland of Albania he recently got three new shoemakers in the capital Tirana. They are also able to put the logo on the shoes themselves, so Jaron does not need an extra person to do this. If everything goes according to plan, he will be able to produce at least 10 times as many shoes as today. With this in the near future, 2020 will start very prosperous.

Jaron’s advice to everybody is to have the courage to do something like this when you believe in an idea and when you think you can help others with it. Many people can do this, you just have to put the effort in it!

Working in the Centre of the World