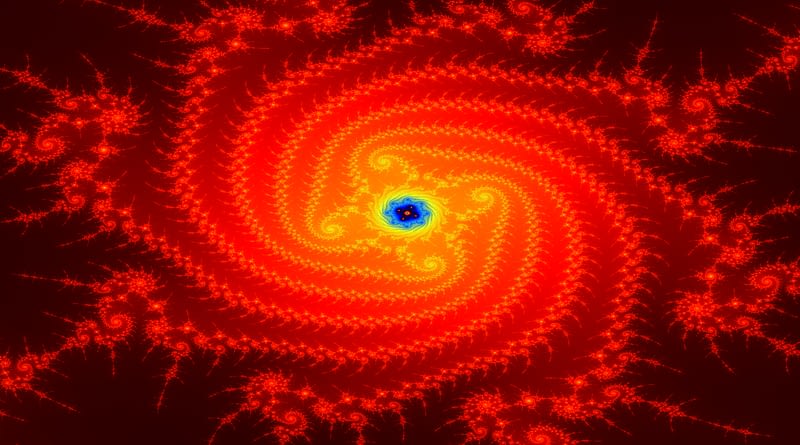 It is rarely the case that something is easier than it looks. However, in my opinion, the Mandelbrot set is the perfect example. For those who have never heard of it: the Mandelbrot set is a fairly simple recursive formula resulting in a complex symmetrically evolving structure that will even intrigue people that are not particularly interested in math.

is called the imaginary unit and

It was Leonhard Euler (1707-1783) who introduced the imaginary unit

, widely known as the cornerstone of complex number theory and complex analysis, and Carl Friedrich Gauss (1777-1855) was the one to introduce the term ‘complex number’.

Now the foundation is clear, we can move to the fun part: the actual Mandelbrot-set (M-set) itself. The M-set is a fractal: a geometric structure defined by its expanding symmetry. Fractals make use of recursion, which results in a detailed pattern that repeats itself. It was Benoît Mandelbrot (1924-2010), who extended the notion of theoretical fractional dimensions to geometric patterns in nature. Yes, mathematics in nature, you read that correctly. We will discuss that some more, later in this article.

A basic and famous fractal is for example the Koch Snowflake, which is shown in Figure 1. As any fractal, its starts with a basis which will, after recursively applying a transformation, reveal a self-similar pattern at any scale. However, the Mandelbrot set, although created by relatively easy mathematics, results in a much more complex symmetrically evolving structure.

What about this relatively easy mathematics? It all comes down to the recursive formula

, where n is a natural number, c is a constant complex number and

turns out to diverge to infinity as n → ∞ are not included in the Mandelbrot set. However, constants c of which the corresponding sequence

converges to a finite (complex) number, or constants c such that

will keep repeating (part of) itself are contained in the M-set. For example, the so called Misiurewicz-points, named after the Polish-American mathematician Michal Misiurewicz, are dense in the boundary of the M-set, which means that for any boundary point of the M-set the epsilon neighborhood of that point contains at least one Misiurewicz-point. Without getting into the specifics, we will provide two Misiurewicz-points; their periodic behavior is shown in Figure 2 and Figure 3. The two points are are

. The first results in the pre-periodic sequence

and the sequence of the latter is

It turns out that the collection of complex constant numbers c that meet the requirements for the Mandelbrot set remain within the circle with radius 2 and its center on the origin of the complex plane, as shown in Figure 4. Therefore, the complete Mandelbrot set is included in this circle. Hence, being a fractal, the M-set is infinitely self-similar and it contains detailed mathematical constructs. Zooming in on the Mandelbrot set will reveal new generations: cute, little babies, no matter at what scale it is looked at. This explains why the M-set was not discovered until the 19th century, even though the necessary complex number theory had already been discovered two centuries before that: modern computers were needed to perform the iterated calculations on the complex plane.

The M-set mostly owes its fascinating appearance to the varying use of color ranges. The coordinates in the complex plane that belong to the Mandelbrot set are often colored black. I am sorry to say that it is actually the coloring of the coordinates that do not belong to the M-set that results in the most marvelous pictures. This is because these are often assigned color ranges that depend on the number of iterations after which the sequence is known to be unbounded. For some sequences this only becomes clear after more than 1500 iterations. Because of the differences in the number of iterations needed before this becomes clear, beautiful, lively colored swirls and frills are revealed: the Mandelbrot set in its true glory. When you open up your imagination, the M-set is not only a mathematical structure, it becomes art. Its shape will remind you of numerous things. Seahorses (Figure 5), a Buddha (Figure 6), lightning bolts, leaves, trees and many more.

As I mentioned before, it was professor Mandelbrot that linked theoretical fractional dimensions to geometric patterns in nature. From now on I promise you, you will not be able to not see the fractal symmetry in nature. Just to get the creativity flowing, I will provide you with some examples. For the vegetable lovers: buy a Romanesco broccoli, but do not get so fascinated that you forget to eat the thing. After my example of the Koch Snowflake, ice crystals and snowflakes will probably already have crossed your mind. But also air bubbles, water drops and fossils are examples of fractal symmetry in nature. The beauty of mathematics in nature, you just cannot escape it! Admittedly, as an Econometrics student, you might already have known this. What you probably do not know is that fractals are used to predict patterns in nature, which helps us to sharpen low resolution images, as can be seen in Figure 7. The thing is, fractal algorithms can sharpen your pictures without making them look over processed, because it actually is adding sharpness and not just pumping up the contrast or anything like that. In addition, it is insensitive to digital artifacts in your photos, because it really looks for patterns.

I think I covered the most interesting aspects of the Mandelbrot set, but for the interested reader, I highly encourage you to take a look at the Mandelbrot set zoom video below. But watch out, an epilepsy/seizure warning might be in order.

Participating in the European Championship of bridge for students in Budapest