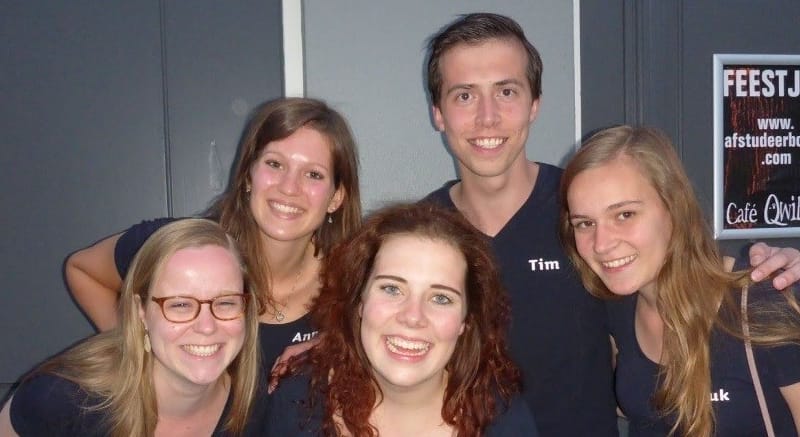 “Tim are you okay with writing your article for Nekst-Online somewhere in July?” asks Charlotte to me somewhere this year. “Completely fine, as long as I can finish it after all my financial documents are correct for this year” was my answer. I should have a lot of time after that because my main task for this year would be done at that moment. The deadline was set on Friday July 21 by Charlotte and I was confident I would manage this with ease.

The evening the Finance Monitoring committee would check the bookkeeping of Asset | Econometrics was set on Monday July 10 so ten days to finish this peace was the very easy task which was given to me. Months, weeks and days past with all kind of fun activities, arguments with my fellow board members, and moments never to forget, until it was the first week of July. “Do not forget to write your Nekst article Tim, because I see you are going on a holiday from July 12 until July 19?” was the friendly reminder Charlotte gave me. “Of course not, I can write it next weekend” was my answer. “You do know you have planned that weekend full with activities right?” Charlotte countered. And so here I’m… writing my Nekst article on my mobile phone in the train from Porto to Lisbon during my holiday.

Every challenge also gives you a goal, and with every goal you achieve, you become a stronger person.

This story describes part of my board year pretty well: planning things in advance thinking you have time enough at that time and when the time came I sometimes had no clue how to manage everything. Fortunately, every challenge also gives you a goal, and with every goal you achieve, you become a stronger person. And now I hear some of you already think ‘there he is with all his ‘look-how-cool-doing-a-board-year-is’ stuff’. But I had to put it in here because it is still true! However I will try to minimize the amount of this stuff in the rest of my text and just try to describe myself and some experiences I had last year, in combination with one of the points with which my fellow board members had a love-hate relationship: puns and bad jokes.

I will start with the committees I tried to coordinate the best I could. In the end, their commit(tee)ment is the basis of every activity.

The D&A committee could have caused a TV show; with the aftermath of our Astrics cantus you could fill a whole show of ‘Exonometricians on the beach’. These creative peanuts could bring every party started in the end. The AMW committee could have easily won the show ‘Astrics got Talent’ with our marvellous vibing show during the Active Members Weekend. The Book of Faces maybe had the last edition ever this year. This is the end of what could have been the basis of a movie called ‘The not so social network’ with the true nature of econometricians in the back of our heads. As replacement we are going to offer a Yearbook which will maybe be a Fearbook for some of you due to some of the content. They are working all summer to give you the ideal flashback to last year. The members of the QIG all could be the main character of the movie ‘The wolf of Asset | Econometrics’ due to their lust for money, which they luckily tried to achieve by using statistical models. The moment the abbreviation EPD was changed from Econometrics in Practice to ‘Escalatie in Practice’ was during one of our committee activities, however they also practiced their new name with the dinner they made for us. In Brussels the participants trained themselves to be a real James Bond during a game of Koezio. All of us, except one, first trained the skills of waiting and later on we managed ourselves through four different levels, while the other one trained the skills of surviving a hangover the whole time. In the end we all could have played a part in our own 007 ‘From Brussels with math’. Next to committees I experienced a lot of other things as a board member and as a person last year. Introducing a Snapchat account (astrics-board is the name for who did not know) could have been a first step for a show of ‘Keeping up with the boardies’, we tried to give an insight in what a board does. All the things I personally had to do could make a trilogy named ‘Lord of the Financial Matters’, which is also a much cooler name than Treasurer. The role as Lord of the Financial Matters and board member also brings a new life motto: ‘Work hard, pay hard’, which came into action almost every week last year. Also there is a song of James Blunt, You Are Beautiful, about the pictures I took with Charlotte every activity. Taking the pictures is a tradition we took from the previous Lord of the Financial Matters and the Secretary.
Beside my board tasks I had time to enjoy time with my friends, roommates and girlfriend. I went on an awesome Geel 14 weekend, where the participants of this weekend are famous for screaming ‘wooooooh Geel 14’ after TEV=VET after each cantus song. I had time to enjoy days out with my girlfriend to for example Utrecht and Amsterdam, which was nice because

Last year I also had some hangovers, however they were easier to endure when you can have them with the rest of your members, your board and other Asset boardies. You can probably guess the movie title belonging to this situation.

A board year can be dangerous as well, which you maybe not expect. The number of Asset board members with scars is remarkable. I also found myself in some situations where my wellbeing was in danger. I tend to injure myself often somehow during activities of Asset | Econometrics. However, this year one of my own members and friend tried to injure me several times. I think this statement raised some eyebrows, so I will explain. The first time he threw a bottle against my head during our Active Members Weekend. He apologized, but apparently the wound was not big enough. So some weeks later he kicked a bucket against my head, splitting my eyebrow open. He did not do it on purpose and amply apologized with a bucket full of beer, which I accepted gracefully.

So as you see you go through a lot of different stuff during a board year with all the members, committees, your board and your friends.  The scar will be a permanent memory of an awesome year and pictures to never forget it.

My life as a convex function

“You should have been there”

Turn the Odds in your Favor