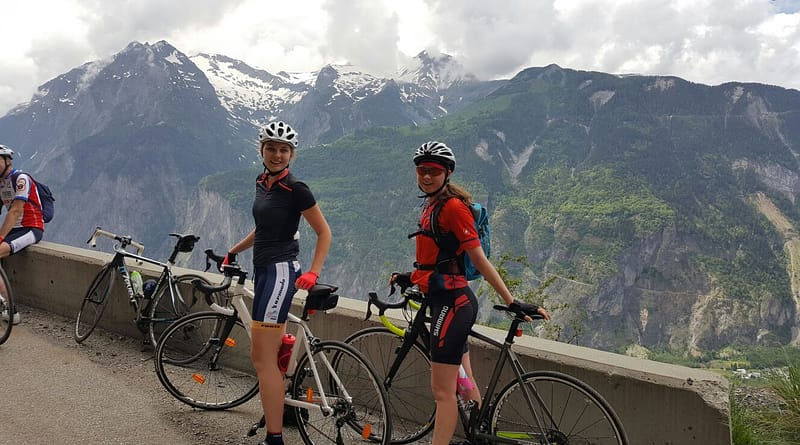 If you would have told me at the beginning of my board year what I would accomplished in June, I would have never believed you. I am glad I have the opportunity to tell you about the Alpe d’HuZes adventure I experienced and the preparations that led up to that day.
Text by: Rachel van der Velden

Sadly, this story has to start with a less happy notice, as it was in January when me and my family found out my father was terminally ill. Suddenly, you are more aware of cancer and what it does to families. You also become more aware of the things people do to fight and resist it. An example is Alpe d’HuZes, an annual sports event in which thousands of Dutch people travel to the French Alps to climb the Alpe d’Huez by bike or by foot (walking or jogging) with a maximum of 6 times a day. By doing so, they collect money for cancer research.

Max and Anne came with the idea to participate and I thought they were absolutely crazy. Max was already an experienced cyclist and Anne had some experience with running marathons, so she was definitely up for the challenge. Myself however, I tried to cycle on a mountain bike once and I crashed into a tree..so you could say I was a bit more hesitant. They convinced me and from that moment on, the preparations could start. One of my teammates participated the year before and she offered that I could borrow her bike for the upcoming months. After spending a lot of money at the Decathlon, I was all set. 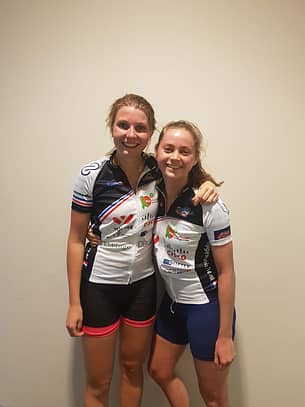 On weekdays, I would go to the spinning classes at the University Sport Center, sometimes even twice a day. And on the weekends, I would cycle near my home in Geldrop or me and my mom would travel to Limburg to climb the “mountains“ there. When your goal is to climb the Alpe d’Huez 3 times in just 15 hours, you can never have enough training and the mountains in the Netherlands will never suffice.

Next to the cycling itself, we also needed to collect a lot of money. With our Asset | Econometrics’ members, we did so by selling food at the Monthly Afternoon, by selling mugs at the Après Ski Drink and by a “fun” game of chance including wodka, at which I (luckily) was not present. I also baked over 60 muffins to hand out to the professors and employers of the EOR Department of the university. Next to that, we had many friends, families, neighbors and even strangers who donated money for the Alpe d’HuZes charity. In the end, we collected a total amount of over € 5500,-!!

All of the above was just the preparation for our week in the French Alps, the real challenge still had to begin. My mom, little sister, uncle, aunt and cousin came with us for support.  Also Jochem and his sister decided to join me and Anne on this adventure.

We arrived on Sunday evening and we had two apartments on top of the mountain, in Huez. We spent the first evening eating, laughing and getting to know each other. On Monday, we mostly slept (as we were still tired from the trip) and explored the town of Huez, which for one week was completely transformed into a small, “gezellig” Dutch town. On the streets people just said hi to each other in Dutch, since the only frenchmen you could find were the employers of the supermarket. The town has a big sport/congress centrum which was completely transformed for Alpe d’HuZes. It contained information desks, bars and a big Alpe d’HuZes shop where you could buy all types of sportswear and equipment for cycling and running, but also jackets, t-shirts and plenty of souvenirs.

On Tuesday, me, Anne, my mom and uncle went cycling with some of my uncle’s friends that also happened to be participating. We descended the mountain by car and then climbed the first 5 turns, which are undoubtedly the hardest ones as they are the steepest and longest, this gave us a bit of insight into what was waiting for us on Thursday. After climbing from turn 21 to 16 (and drinking coffee and eating apple pie), we cycled a beautiful tour over “the balcony” of Alpe d’Huez, which had a perfect view over the entire valley.

On Wednesday, the Alpe d’HuZus took place, which is basically the same as Alpe d’HuZes, only the participants climb the mountain one time, instead of between one to six times. As the Alpe d’HuZus still had some spots left, Jochem, my aunt, niece and little sister also decided to participate in Alpe d’HuZus by foot. My mother and uncle decided that they wanted to participate by bike. They figured: why not, as they were already there, they brought their own bikes and in this way it was nice that they could also make an effort and contribute to the event. Now it was me and Anne who were waiting and cheering at the finish line. I even had to hurry to get there as my mother was very fast and I was still in the apartment. She even was the first woman to finish that day!

Thursday, it was our turn..or maybe it is better to say Wednesday night. Since the start was at 4.30 hours, however, you could only descend the mountain by car until 4.00 hours. Which resulted in us having to be at someone’s apartment before 3.00 hours. As you would expect, we did not go to bed early and were pretty anxious, which of course did not help. With only two hours of sleep, a lot of nerves and many energy bars and bananas, we were ready to go.

It was unbelievable how many supporters were present at the start, even though it was half past 4 in the morning, it rained ánd it was very cold, thousands of people were applauding and cheering. We started in the dark, and about 2 hours and 15 minutes later, I crossed the finish line in daylight. Everyone that came with us got up early (it was still only 7.00 hours in the morning) to be there with us. While they waited to see Anne finish, I immediately went to bed again. After a (well deserved) power nap, it was time for coffee and to eat bread, bananas and energy bars, in order to get some energy. Before I could climb the mountain again, I of course had to descend first, which was quite an experience on its own.

The second climb was quite different from the first one. Instead of the darkness and cold, it was sunny and (too) warm. Because of this, I had to take much more breaks, which resulted in many interesting conversations with completely random strangers. Everybody climbing that mountain is doing this with the same goal, to fight cancer. This creates a really genuine and friendly atmosphere. Everyone is up for a talk, everyone is enjoying the view and everyone is supporting each other.

Before I could go for the third time, again, a power nap and many carbs were needed to get my body working. This time Anne and me met at the bottom of the mountain to climb together our third and final time. I was absolutely exhausted, but Anne would not let me take breaks as much as I wanted to. This time, it was raining a lot, but that definitely did not kill the mood on the mountain. More than ever, there were people cheering, applauding and encouraging us for the final kilometers.

The reception at the finish line was amazing, hundreds of people, all united by love, pain and the disease that unfortunately still touches too many lifes. The first thing me and Anne did was get one of those silver/gold rescue blankets, drink a lot of hot bouillon and eat fries and “kroketten”. The day after, we slept pretty much all day and spent some time with my family and enjoyed the view of the French Alps for the last time, as we went back to the Netherlands the next morning.

Hopefully I gave you an idea on what Alpe d’HuZes is about and the atmospheres and unity between strangers that it has. If you are ever given the opportunity to come along and support someone or if you are up for the challenge yourself, do not hesitate! This week has been one of the best weeks of my life.

From a roller coaster to a Ferris wheel

Life Besides a Board Year

A day in the life of the girl with three functions