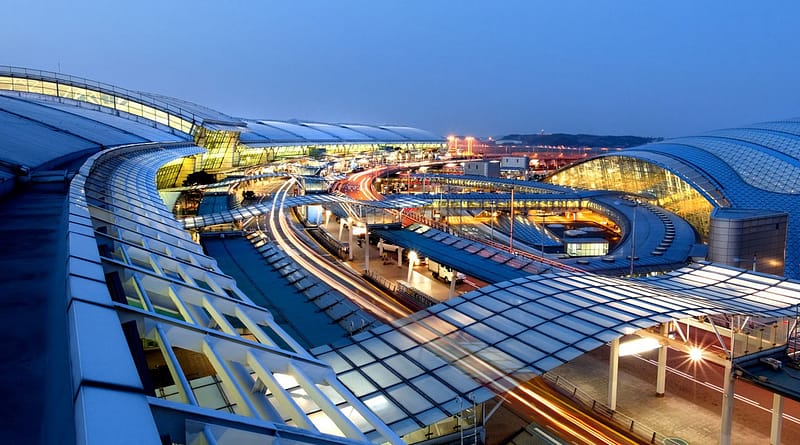 The start of our trip was just as expected, since we arrived perfectly on time, even a little bit too early and had a great start with playing some games to pass the time. While sitting at our gate, it was announced that our flight to Warsaw had been delayed, luckily, we did not know yet that this was a kick start to many more problems.
Text by: Claire Vink

After a 1.5-hour flight to  Warsaw we still did not know what was a head of us, we bought some delicious lunches and continued to play some card games. But after we popped our first beer, Rogier asked surprised why our flight was announced to be cancelled. Three of us went to the information desk to check it out and unbelievably our flight was indeed cancelled. There was quite some stress at the information desk since a lot of people had to be rebooked, as another flight was cancelled too. This was all due to a strike of the cabin crew from LOT Polish Airlines. We immediately knew that it wouldn’t be possible to get rebooked with the whole group at once, but after a while we were quite happy to hear that 7 people of us could get a flight to Moscow and then transfer there to a flight straight to Seoul. The flight departed within half an hour so with a lot of stress they managed to be there on time to catch the flight. After a little while we were informed that the rest of us would fly to Doha in Qatar and then transfer to Seoul. As you might know this is not the shortest route to Seoul since this adds but this turned out to be one of our least worries.

We had only 1.5 hour to get out of the airport and check-in again. We had to pick up our luggage, then leave the airport to check-in, do all securities checks and so on again.

We managed to this all  in time, but then we crossed the other group and we heard that their flight to Moscow was delayed and that they had to be re-booked once again, since they would not be able to catch their transfer flight. Unfortunately, they had to stay in  Warsaw for the night and would fly to Frankfurt the next day and then straight to Seoul.

With mixed feelings the rest of us stepped onto the plane to Doha. We were all surprised by the enormous luxurious plane, and this definitely made up for some of the drama we had been through. We had delicious meals, a lot of entertainment since you could watch the most recent movies and play many games. And not to forget that everything was for free, so we could even get lots of alcoholic refills. We soon forgot our problems since our complains became to be that the drinks are too alcoholic. Too our surprise we were also able to call each other by a sort of phone by simply pressing the rest number.

We all had a pleasant flight, but this all changed when we realized that we had   a one-hour delay and that our next flight departed half an hour later. We rushed out of the airplane and were very stressed when we  realized that we had to take a very long bus ride before we exactly reached the airport. We had to go to a security check and had to take  a train to the gate. The last boarding call  had been made, and we still did not  arrive at  the gate. Some of us sprinted forward and explained the situation to the crew , who waited for the rest of us.

So luckily we all  caught the flight and we were finally on our way to Seoul!! Around 20.00 o’clock we arrived at our hostel and after everyone settled down we could finally enjoy a traditional Korean BBQ at 22.30. Luckily, the others who had to stay in Warsaw  were not bored since they went sightseeing in over there and had a very pleasant stay at their luxurious airport hotel.

After two long days we finally went to bed, and all hoped that the other days would not be as dramatic as these.