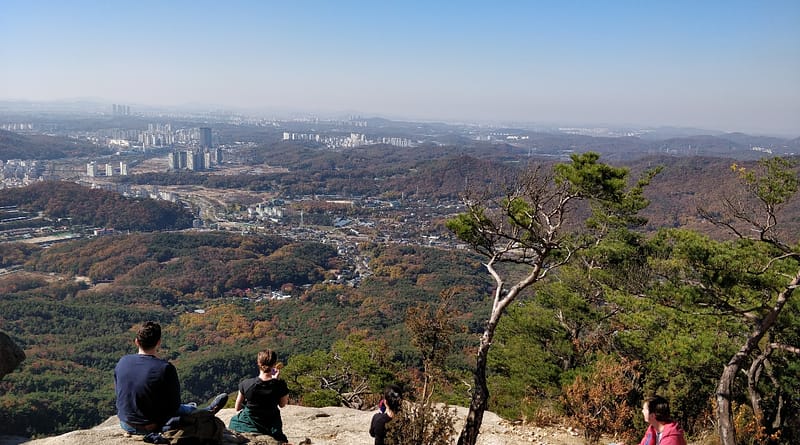 My decision to go to bed early paid off and I started off Tuesday feeling reborn. Most of us had a decent amount of sleep and around 10 o’clock we started our one-hour travel to Bukhansan, a national park near the outskirts of Seoul, for a long hike.
Text by: Jasper Mol

Outside the national park were plenty of shops which sold all kinds of hike gear. This was the first time I questioned my preparations for the hike. Earlier that day my outfit (sneakers, a sweater and sweatpants) seemed suitable but now I realized I might have been ill prepared. So, I decided to slightly upgrade my outfit by purchasing a pair of climbing gloves. The shops did however spark my insecurity and I was now even looking at a cap against the cold temperature at the peak. looking back there was no way I would have ever needed this, it was approximately 17 degrees Celsius and the highest peak in the park was under one kilometer.

After everyone got their last supplies and used the last proper toilet we would see for the next five hours, we went on our way. It did not take long before our group got split into multiple subgroups. The majority took the intermediate trail which led to the highest peak of the park at 836 meters. Five, including myself, decided to test ourselves and take the expert trail. And tested we were. The trail started with couple of hundred meters between the trees, after which we reached the ‘danger zone’: a one-and-a-half-kilometer climb over rocks, with an average slope of 30%. Halfway to the first peak we encountered a couple of elderly Korean men. Upon noticing that not only I, but three of us were wearing sneakers they signaled there was no way we would have enough grip to climb all the peaks. Being too proud and stubborn to turn back I continued with the climb, as did the others, and some time later we reached the first peak. The view over the city was stunning and we all took a moment to take in the scenery.

After the first peak we climbed two more, each as beautiful as the first. Once we descended a bit and faced a crossroad in between two peaks, we decided to make a small detour to visit a temple. The temple was more like a tent with a vegetable garden than anything else, but there was a wooden deck on which we decided to take a quick rest. We just lay on the deck and enjoyed the solitude of the mountains, hearing nothing but the sound of birds singing and wind blowing through the trees. Before we could fall asleep, we agreed to get back to the trail and finish our decent. Aside from the occasional slip, caused by heaps of leaves and the lack of grip from the sneakers, the descent was much less spectacular than the climb. At the bottom of the descent we stumbled across a temple which displayed a stone carving of a buddha that dated back 1000 years. We were now back into civilization and from here it took us some 30 minutes to find a bus stop. The bus lead us back to the nearest metro station which consequently brought us back to our hostel. Temple with an ancient stone carving of a Buddha

For dinner we went to a nice Korean barbeque restaurant just outside our hostel. We toasted on the group bonding exercise, which the day was, and enjoyed our well-deserved meal. Later that evening we decided to go to Zen for some drinks. A nice ending of a very satisfying day which was a much-needed escape from the massive city, and one of my personal highlights of the trip.