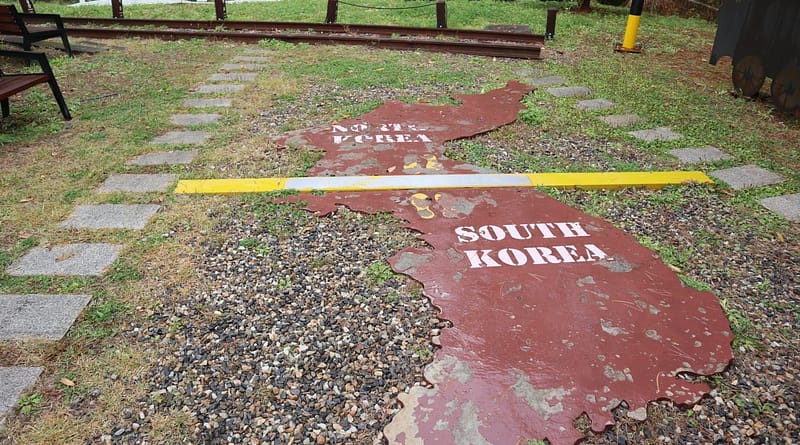 On Friday we had planned to go the border with North Korea. We booked a day tour and the plan was that we would visit the DMZ (demilitarized zone) and the JSA (Joint Security Area).
Text by: Max Wilke

Unfortunately, the JSA part was cancelled because of demining of the area. We still got to visit the DMZ and got an extended tour about this part. We got to see a museum, several observation points and we went into the third infiltration tunnel, a tunnel which connected North- and South Korea, made for war purposes. Even though we were not able to see the JSA, we got a lot of information about the Korean war and the border. It was a very interesting morning and afternoon!

The tour ended at 15.30 hours and most of us went back to the hostel to have some time to relax and freshen up. We gathered again at 18.00 hours to travel to Itaewon and have an amazing Korean BBQ together with Yvan van Dam and his wife. Yvan grew up in the Netherlands and was once a board member at the financial study association in Amsterdam. Four years ago, he and his wife moved to Seoul and he currently works for Samsung as an Engagement Manager. Yvan and his wife both could tell so many stories and experiences about living and working in Seoul as a Dutch person! It was a very nice dinner, and everyone could ask their questions regarding their new life in Seoul.

After this fantastic Korean BBQ, we headed to the first pub of our Pub Crawl! Since the dinner lasted until 22.00 hours, we missed the first pub and joined in at the second. We went to two different bars and the final spot was a really big club! At every bar, we had some beers and shots. I will keep it for the night, since what happens in Seoul, stays in Seoul.