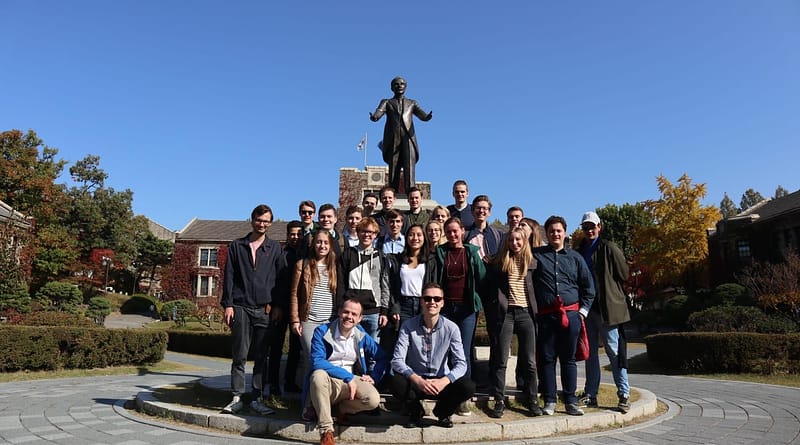 After a short night, we were up and early on the road again for our first university visit in Korea, namely to Yonsei University.
Text by: Rein Sint-Nicolaas

At Yonsei University, we were received by two students who gave us a tour around the campus. It was a modern campus which also included beautiful traditional buildings. Did you know that the president of Yonsei has his office in the building in the background of the following photo?

After a meal in the Mensa of Yonsei, we walked to the National Assembly of Korea. This is where the government works and debates are kept. Being more than 70 meters high, the building was very impressive. During the guided tour, we were explained how the democracy in Korea had come to existence and how the political system works. On the way back we also saw some activists who silently protested against the government. The protest was mainly about the negotiations that were going on about uniting with North Korea.

The day was not over yet, as we paid a visit to the impressive fish market of Seoul. The fish market consisted of two floors: on the first floor you can buy the fish you want and on the second floor you can have the fish cooked for you. Left and right fishes and octopuses flew right by your nose and it was a remarkable experience. The Koreans found this all way too funny and teased us by dangling an alive lobster right in front of your face. All in all, it was another interesting day in Seoul!