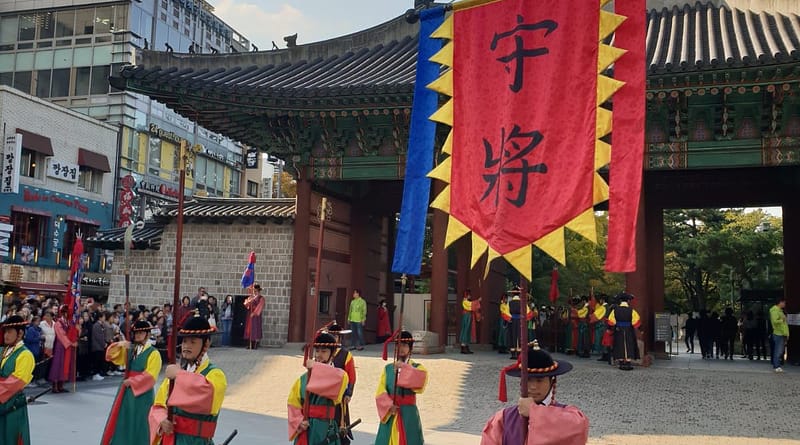 After a long flight we finally got to explore Seoul for real, now being with 17 in total.
Text by: Rein Sint-Nicolaas

So first things first, let’s pay a visit to Gangnam! Gangnam is the financial center of Seoul and here we visited the first company: SAS. At SAS we were received by Sean (whose name was given to him by an Irish friend when he was living in the US) and we had a lecture in Korean. With the help of a tolk we learned about the program SAS Viya and they showed us how they are able to detect credit card fraud by means of the software they use. SAS was very hospitable and our visit was a very educational experience!

After the visit we went to visit the palace Deoksugung where we witnessed the changing of the guard. A ceremony with lots of Koreans was shown in which every person had his own function: there were a few guards, two commanders and a small orchestra providing some (off-tune) music. There also was a massive drum which one person used to produce a loud blow. It was funny to see how some elderly people were startled by this, because they just happened to walk by. Next to this, we visited the palace and the garden surrounding this. It was very beautiful to see this traditional building in the middle of sky-high buildings.

Just around the corner of the park was the Dutch Embassy, which we paid a visit afterwards. The Embassy shared a building with only other countries starting with the letter ‘N’, such as Norway and New-Zealand. The only country missing was North Korea.

At the Embassy we were finally reunited with the other part of the group who had to spend the night before in Poland. We were received by Peter, who had been living in South Korea for more than ten years already. Here we were given the opportunity to ask all about the prejudices that other countries have about South Korea. It was interesting to hear all about daily life in Seoul. Peter was also interested in current affairs in the Netherlands, like whether ‘Goede tijden, slechte tijden’ is still running on TV.

This was not the end of the day yet, because we obviously still had to celebrate the fact that we were finally together with all 24 of us. We were told that Koreans in general consume a great amount of alcohol, so we wanted to test the trueness of this statement. Besides, let’s say some people wanted to watch the soccer game of PSV (considering the time difference of seven hours). It was a long, interesting and very fun day!