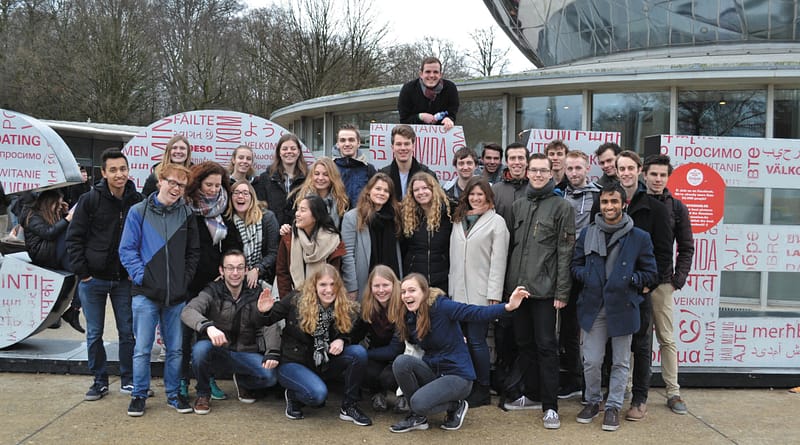 During our Santa Claus Drink the destination of the trip was announced: Brussels! Since last year’s trip destination was also a Belgian city and lots of fun, I was immediately interested in joining this year as well. Unfortunately for, me I was not the only one who was interested, because in a record time of only 3 hours the subscription was full and I was placed on the reserve list. After I tried to convince the committee that I really wanted to join (“trip,trip trip, we willen dat Juul meegaat op de trip”, thanks for the support, Thijs), suddenly a spot became available and I could attend!

On Friday morning, we gathered at the University for a two-hour bus trip to Brussels. This is where we heard the very short track list for the weekend for the first time, consisting of classics like ‘Bubbelbad’, ‘Tante Lien’ and the very special ‘Enter the ninja’. If you do not know the last song, I would definitely advise you not to listen to it, because it will ruin your day.

After the exciting bus trip, we arrived at the European Parliament. Here, we attended a presentation, from which I can only remember that our guide was very disappointed that 99% of the group knew nothing about the Parliament and the European Union. After the presentation, we got to see the big conference room, which was quite nice.

The first beers and lunch tasted great, and with renewed energy we started a city tour. The committee showed us all the hotspots of Brussels and told us some nice stories. During the city tour, we had a break in which most of us tried some amazing waffles; I had to find a really cool shot glass and desperately needed coffee, which is strangely enough impossible to find. The tour ended and we went to our hostel, where a lovely, friendly lady explained the house rules of the hostel. Here, we had some time to chill, which some of us used to decorate their room with fifty balloons and already drinking a few bottles of wine to get in the right mood. Then, it was finally time for some food! We went to a nice Mexican restaurant, where we ate some nice burgers and tacos. The highlight of the dinner was when birthday girl Anne received a special serenade from two lovely Mexican waiters and we even got a free sombrero.

Next on the program was a pub-crawl. Since it is difficult to find a place where 30 people can party, the pub-crawl consisted of 2 bars, but that was not a problem at all. After the first dances and drinks we went to our favourite bar for the weekend. I do not remember the name of it, but I do remember that the air-conditioning made your hair look fabulous and with live camera footage on the walls we could check out the entire bar. Another bonus was the happy hour, where you could buy a half litre of beer for only 2 euros. Also, for the small amount of 4,50 euros you could buy one shot of tequila, which is always a perfect idea when you are already drunk. We all had a really fun night and after a stop at the McDonalds (open 24 hours per day, a dream come true) we went back to get some sleep. The next day, we gathered to play a game of Cluedo in the city. We were placed in groups and had to find the committee members in the city center, to find out by who, with what, and where our beloved board member Tim was murdered. After running around all morning, we finally thought we knew the answer, but unfortunately we were stupid and did not understand the game, so no victory for us. After the game was played we had plenty of free time. I went to an Irish pub with some people, where we listened to our favourite track list once more and regained some energy for the rest of the day.

In the late afternoon we visited a comics museum. I hardly know any comics, but they did have a really cool mushroom home for small children in which we could hang out. Most of us were quickly done watching the museum, so we ended up drinking some beers before we went to eat dinner. We went to an Italian restaurant, where we ate some nice pizzas and some bad risotto. Especially Loes enjoyed her “rice with tomato sauce” very much. Our table decided to play a game to get to know each other better. We now know for instance that the favourite animal of Bas is a duck, because they chat really cosily together and he would like to join them. Bas also started a discussion about whether being on your period is an emotion or not and we discussed things such as who would be the most adventurous econometrician of the group. All things considered, we learned a lot about each other.

Then, it was time for a karaoke session. Unfortunately, there was not enough room for us at the bar and therefore we had to go to somewhere else. Luckily for us, we were lured into the shadiest bar I have ever seen, located next to the karaoke bar, with free shots. The waitress looked like a hooker, the DJ seemed so surprised by the large crowd that he forgot how to play decent music and there were really special disco lights, but hey, we did drink free shots and enjoyed ourselves.

Afterwards, a large part of the group went to the same bar as the day before, while some went back to the hostel to sleep. We had an amazing night and together with a few people, I once again ended up in the McDonalds. We even had to wake our sleeping beauty Thijs, since it is not allowed to take a nap there. Back in the hostel we heard that someone was not feeling well, so with a couple of #staystrong’s and #prayforridho’s over WhatsApp we hoped that he would feel better the next day.

Back in the hostel we heard that someone was not feeling well, so with a couple of #staystrong’s and #prayforridho’s over WhatsApp we hoped that he would feel better the next day.

Unfortunately for Ridho, this was not the case. Most of us felt a bit hung over, but seeing Ridho made everyone realise that his or her problems were not that big. The idea was to go to the Atomium from a non-existing metro-station and to go inside the balls. This plan changed slightly because the queue was really long, so instead we listened and danced to the songs from our track list outside.

Then it was time for Koezio! Essentially, it is a really active escape room in which we were taking the role of special agents. We were divided into groups and had to wear a special overall. In the first round, we had to find special signs in a maze in order to crack a code. In the second round we had to activate sensors that were hidden in various obstacles such as a ‘ballenbak’, in which I almost drowned. In the third round we played some brain games, after which it was time for the most exciting part. We had to go over a  trail that was more than 10 meters high. You could choose between easy and difficult obstacles, so for everyone it was doable. Afterwards, we all were exhausted from an afternoon of running and climbing, but everyone enjoyed it very much!

Then it was time to go back home. With half of the group we enjoyed a nice dinner at Studio to end the weekend together. I would like to thank the trip committee (Lotte, Jeroen, Max, Loes, Irmgard, Tim and Remco) for the great weekend: everyone had lots of fun!

Where Math and Art Meet