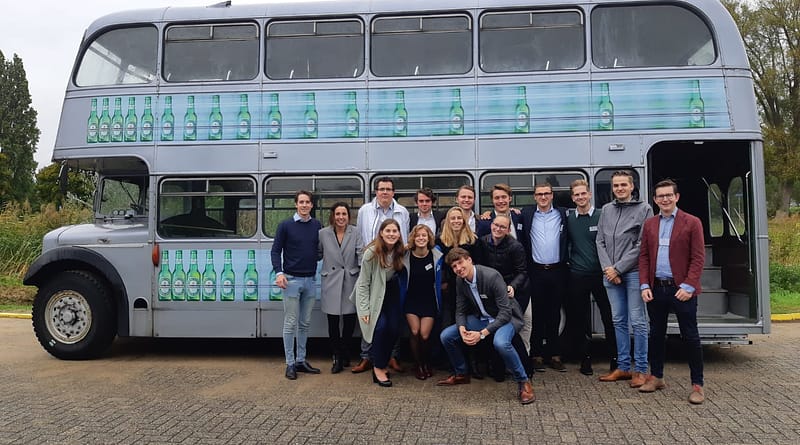 On September 24 fourteen motivated students left to visit the main factory of Heineken for an inhouse day. After a pretty long travel to Zoeterwoude we arrived at 12.00 hours. It took some work to figure out where we needed to be at the enormous complex, but after a while we found the right building. text by: Bas Verkaik

When we entered, we were greeted by six employees of Heineken. We all agreed upon the idea to have lunch first before starting with the presentation and the case. There was a wide variety of sandwiches to choose from, and there even was beer for lunch (although it was 0.0%). Then it was time to start with the presentation. In about an hour we got a lot of information about all different possibilities at Heineken, as well as some information about the international expansion of the brand. We also learned what different brands all belong to Heineken. For example, I didn’t personally know that Brand belonged to Heineken.

After the presentation it was time for the case. We were divided into groups of four students and got the explanation. Based on the data of the sales figures of different types of beers at differently located bars we had to come up with a recommendation for new beers to sale. There was a wide variety of beers we could recommend. Wheat beers, dark beers, seasonal specials, radlers and alcohol free beers were all potential candidates. We all had a hard time solving the problems, and choosing a model, but in the end we all came with a set of recommendations. Every team had a totally different bundle for offer, and thus it wasn’t easy to see the winner, but in the end a winning team was chosen.

After this case it was time to continue with a tour through the enormous brewery. When we walked out of the building there stood an ancient Double-decker-bus that was painted into a Heineken story. When we climbed onto the second floor of it, it was pretty clear that it wasn’t made for modern giants, as some of us had to bend in to be able to walk there.

After a few minutes driving we reached the entrance to the brewery. We first started above the fermentation boilers, where in different stages the beer is made. The smell of the fermentation was clearly present. Some said it stank and others said it smelled delicious. The kettles were gigantic, which is no surprise after we previously heard how many beer Heineken produces every day. Although it was pretty noisy we got a clear instruction about the brewing process. Every one of the seven different steps was mentioned, and some even discussed joining the mania of self-brewing. Now it was time to see the bottling facilities. There were countless assembly lines that produce thousands of beers every minute. There were two lines filling Amstel. Also, Sol and Desperado were filled at a line. However the majority was filling Heineken into bottles of all different sizes. The usual 30cl bottles, but we also saw  different American sized bottles ranging from around 15cl to 66cl (it is actually in fluid ounces). At the back of the enormous hall were tons of pallets with beer boxes waiting to be shipped. The pallets that were just finished at the filling line moved through an automatic transportation system, which directed them towards the right truck.

After seeing this impressive sight, we returned to the bus to drive back to the company bar. Here we had a drink with many mathematicians of Heineken, and a big variety of beers to choose from. We were even told about the discounts Heineken employees get when buying beer, as for which student wouldn’t a very cheap unlimited source of beer be a dream? All together we had a very enjoyable day, and I think many of us became even more interested in the company.

From Research to Rector