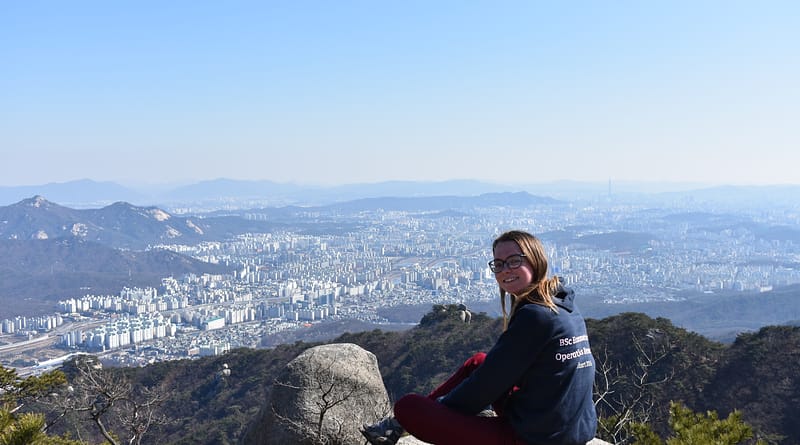 Going on exchange during a global pandemic… My exchange experience is somewhat different than others, but luckily I was still able to go on exchange during this pandemic. I have been to South Korea from the end of February until the end of July, where I studied at Sungkyunkwan University in the capital, Seoul.  Written by: Jasmijn Aartsen

In January when COVID-19 was spreading around China and the rest of Asia, and everybody in Europe didn’t care too much, I was planning my exchange to South Korea. My flight was scheduled for the end of February and at that time South Korea was, next to China, the most infected country in the world. My host university and Tilburg University still allowed me to go, so with some worries from my family, I flew during the Carnival break to Seoul, my home for the coming semester.

On the plane, I already met four exchange students from my university and together we went to our dorms. In Korea, most students live with their parents or in the university dormitories. I lived in a girls flat because boys and girls are strictly separated and not allowed in each other’s dorms. We were sharing the room with an assigned roommate. Mine was a girl from the Netherlands and we luckily became really good friends, otherwise sharing a room would have been a more difficult task. Almost everybody arrived on the same dates: the first days the dorms were open, and since the host university made a group chat with all exchange students, we could easily hang out. During the first weeks of my exchange, we met almost every day at a bar close to the university and at all the dorms to get to know all other students. In this bar, we made plans for the day and new friends were made very easily.

Since we came from “the safe Europe”, we had to get used to the COVID-19 measures in Korea. There were no strict rules and almost everything was open as usual, but still, the city felt quite different. Due to the coronavirus, the streets in the normally busy city of Seoul were quite empty. Lots of Koreans were afraid of the virus and stayed inside. They also wore a facemask outside almost all the time, while this was not mandatory. We got checked on our temperature several times a day when going in the dorms, big shops, or governmental places. Nevertheless, we quickly got used to how the Koreans were handling the situation and it felt really safe.

Only one time we experienced how the government controls the coronavirus. The clubs had been open and one person was tested positive after going clubbing in one of the main clubbing areas. We had also been there on the same day. You had to write down your phone number at every club you go in, so the government could call and text everybody who was in that area. Not all of us were called, probably because of the handwriting, but still, we all had to get tested because we had been in that clubbing area where one person had tested positive. If we did not get ourselves tested, we would risk a fine of a few thousand euros or we would be sent out of the country. Here, we could see that English is not Korea’s best quality. All communication was in Korean and it was difficult for us to find a place where they had time to test us. Once we found it, we had to say where we had been in the area and got our test. The next morning, we all got the results and none of the exchange students tested positive, so this was a big relief since quarantine is mandatory in Korea and they will track your phone if you do not follow the rules.

In the meantime, the virus had also arrived in the rest of the world and a lot of exchange students were sent back to their home country. The Netherlands let us decide for ourselves whether we wanted to return or stay in Seoul. Because the virus was quite under control in Korea, and at home, they still had to figure out how to deal with the virus, I decided to stay in Seoul. Now, we were only left with less than half of the exchange students that would be there originally, but luckily my closer friends stayed too.

The university life was of course different since we had online lectures the whole semester. In Korea, being present during the lectures and participation count in your grades. This meant that we had to watch all lectures within a week to get the full participation grade. There was also a language barrier. My professors could speak English quite well, but the students really struggled with this. This made presentations and debates quite difficult. I followed a lot of data analytics courses and those were mostly focused on programming and processing data. Since the lectures were held online, we got a lot of extra homework assignments to make sure we understood what was going on. All this was mandatory to do and counted quite a lot for your final grade. The exams and midterms were conducted online without that much supervision. Sometimes, you had to put on the camera to make sure you were alone, but the internet was accessible. They trust the students to do the exam on their own. This was because there is a lot of competition between students, only the ones with high grades can get good jobs. The Korean culture is that you want to be better than your classmates, so you will not help them.

Most lectures were recorded, which gave us a lot of freedom to make plans to discover the country. We mostly studied during the first few days of the week and did some fun things during the weekends and evenings. After two months, we had already seen a lot in Seoul, but we wanted to discover more. That is when we started to travel. When we were at home, we studied long days to make sure we had the time to travel during our trips. Also, we planned some free days during our trips to study, especially when it was raining.

Together with a large group of exchange students, we went to the second biggest city in Korea, Busan, to discover a new city, look at the sea and have fun. We flew to the island Jeju, the Hawaii of Korea, for the waterfalls, beaches, and hikes. As we loved the nature in Korea, we went to the most beautiful national park in the east and hiked there for a few days. After the semester, we went to Busan again to enjoy the holidays and the nice weather on the beach. To experience the life of a monk, we went to a temple to stay there for a night. One positive note about the online lectures is that we had all this ‘free’ time to travel inside the country.

The thing I liked the most was just the daily life in Korea. We went out for food once or twice a day, because the food was so cheap in restaurants. Every international was open and always welcoming you to activities. Moreover, you really stand out in this homogeneous culture, if you are not Asian. So, it is easy to spot other exchange students and English teachers, which made it really easy to contact other people and make new friends. We were able to do so many things. We were there during the cherry blossom season, Buddha’s birthday, and we celebrated Kingsday with a large Dutch group. We wore the traditional Korean dresses to a palace, went to the highest tower in Korea, and hiked to the highest mountain. I even danced to K-pop songs and sang in karaoke rooms. There is just too much to tell.

It was not the usual exchange, but an unforgettable experience and I would totally do it again if I have the chance. Going to South Korea was a good choice, I loved the food, culture, and nature and if it was possible, I would love to visit the country again!