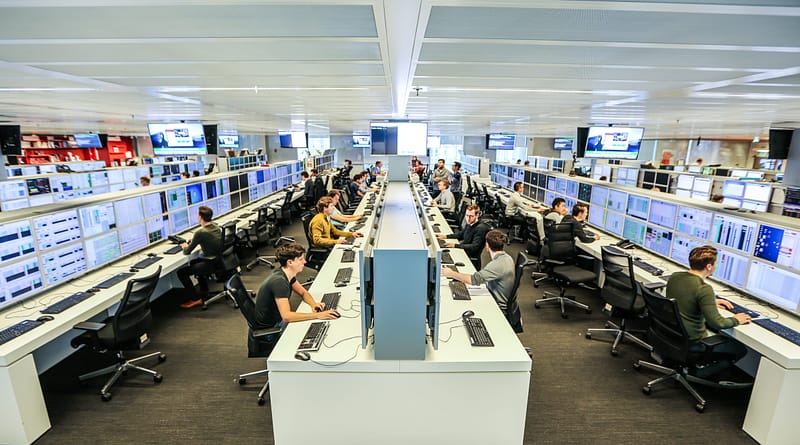 Flowtraders holds office in Amsterdam, separated from the central station by a few minute tram ride. Steven originates from Limburg and studied Econometrics (Master: QFAS) in Tilburg. During his studies he was member of T.S.R. Vidar and Asset|Econometrics, a period which came to an end 10 months ago, after which Steven joined Flowtraders.
Written by: Dominique Bavelaar

Steven: “I actually have never taken any other company into consideration. It really appeals to me that in Flowtraders, you make use of the skill to look at patterns and processes in an analytical way, which you learned during your studies.”

A typical day in office
Of course we asked Steven how he applies these skills during a day on the trading floor. Steven tells us about two scenarios: one relatively quiet day and one which is more busy and hectic and they happen to be of quite different nature: “My alarm goes off at 6:45 after which I head to office, where I start at 7:30.”, Steven explains, “Then we start off with calculating the values of the products we sell and verifying our pricing models. After that we start trading. When it is busy, for example after major political events or societal turmoil, traders make 50 trades a minute! This means you have to be really quick while making decisions.” This is not the case every day though: “When the market is quiet, we are mainly occupied with improving our models, which are used to forecast price movements. However”, Steven proceeds, “there are always unexpected events in terms of price movements and it is part of your job as a trader to feel whether you have to improve your model, or that you are dealing with an outlier.” According to Steven, this part of the job puts the most pressure on a trader, though he indicates he actually likes the challenge this brings. This actually is a vital characteristic for a successful trader at Flowtraders, Steven stresses: “If you are not able to cope with stress, this certainly is not the right job for you.”

During his job as a trader, Steven works together with approximately 50 other traders. Note the works together here, since at Flowtraders employees get a bonus in case the team as a whole performs well. Steven: “For that reason, the atmosphere is really relaxed and everybody wants others to make a profit too.” Besides traders, also quants and software developers are part of the Flowtraders company: “The quants are occupied with econometric analysis of stock and equity markets. They are”, Steven explains, “developing new forecasting models or improving already existing ones. These models have to be implemented in software, which our software developers build themselves.” This software is top-secret and is hence not sold to parties like banks or other financial institutions.

Flowtraders is specialized in selling so called ETF’s, Exchange-traded funds, which are actually ‘baskets’ of different stocks or bonds bundled together. The demand for these products has been increasing lately, mainly because they has relatively low transaction costs when compared to buying all the tradable assets one by one.

Development within the organization﻿
After you join Flowtraders as a Junior Trader, you start with a training program, which lasts approximately half a year. Since a new cohort of traders consists of people with different backgrounds (Applied Mathematics, Econometrics or Physics for example), not everyone is on the same page in terms of financial market knowledge. Steven: “During this program you are taught everything you need to know about stock products and pricing. It is a bit more practical than the courses during your Econometrics studies, since it is tailored to the daily work as a trader.” These klasjes really bond with each other: “For example, you have to organize a party for the whole company with your training class and during the training program you work intensively together.”, Steven illustrates.

Most of these traders are also very young: the average age of a trader is 32 years old. If you perform very well, you can promote to the function of head of desk and eventually head of trading, which grants you more responsibilities, resulting in that you have to coordinate your team while being a little less occupied with programming and trading. The structure is not that hierarchic, though: “It happens often enough that the CEO himself makes a chat with me or asks me to do something in person.”, Steven adds.

Challenges and developments
The job as a trader is quite intense and the biggest challenge is to stay sharp all day. This is not a big concern for Steven, though: “Since I actually really like the intensity and the variety of events during the job, I have no problem at all to stay sharp.”, Steven explains, “I often compare it to online poker, which is also quite demanding in terms of concentration and energy, though since it is a fun activity – at least in my opinion – it is easier to stay sharp for a longer period of time.”

Challenges on a company-wide level lie mostly in staying ahead of competition. Steven: “Since we are very specialized in ETF’s, we can actually stay ahead in this specific field. There are other trading companies, each of which distinguishes themselves by specializing in one particular product. Banks are less specialized and focus more on individual stocks or bonds, hence they are not competing with our business. They actually might be interested to buy one of our products rather than competing with us.”

In terms of developments within the organization, Steven notes that Flowtraders is more and more becoming a technological company, rather than a financial business: “The situation used to be different, since we had a lot of financial specialists, who traded based on their financial knowledge.”, Steven explains,” However, more and more technology becomes available and trades can be handled faster and faster.”

The company also becomes more and more international: since it is hard to find talent, Flowtraders recruits from all over the world, having a global orientation program in Singapore, Hongkong and New York City. This results in that employees speak English among each other. A nice benefit of the international-mindedness of Flowtraders is that if you want to join one of the offices in the cities, mentioned a few lines earlier, for a few years, that is possible too!

Finally, Steven states something interesting: “As a trader, you can make a lot of money if you perform well. However, even if money did not play a role, I would still want to do this job, since I like the challenge and complexity so much. That is actually the most important.”

We would like to thank Steven for his time and his interesting insights in the daily life of a trader.

It Is Thrilling When a Business Immediately Uses Your Research