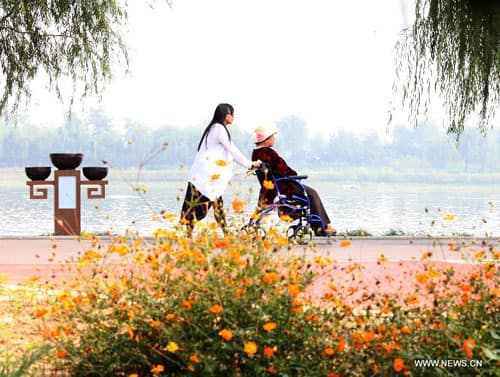 Gijs Vereijken just received his MSc of Economics, Netspar track, from Tilburg University. He completed his thesis project at the Dutch pension provider PGGM and Rabobank on the topic of “Balance sheet alliances between Dutch banks and pension funds”. Gijs is currently traveling through China while he decides exactly what he wants to do next.

China is a very interesting country, especially given the ageing problem. Why did you choose it as a travel destination?
“It is true that it was not entirely coincidental,” Gijs says with a smile. “As part of my Master’s program, I wrote a paper on the Chinese pension system, which triggered my interest in the country. One of the major findings was that a tremendous number of people fall outside the scope of the pension coverage. Indeed, during my trip I saw many elderly people living in poverty or still working in their old age to make ends meet.”
Gijs met many other backpackers (including economists) from around the world and discovered that it is with good reason that the pension system in the Netherlands is the third-best in the world. “This experience gives me a broader perspective and changed my opinion of the Dutch pension system,” he admits, “but I still think we need to reform it.”

How do you think the pension system will change over the next ten years?
“I think there is going to be a shift in the Dutch pension system from collective pension schemes to more individual plans,” he says. “As the job market becomes more flexible, there is a growing need in Dutch society for more flexible, and more transparent, pension plans. So, as opposed to collective defined benefit pensions, which were the most common type of scheme in the past, I think we are moving more toward individual defined contribution pensions.”
Gijs adds another argument for this change: “There is an inherent transfer of wealth from young to old in the current system. You cannot justify that to my generation, in my opinion.”

What do you think you learned with the Netspar track above and beyond what you would have gotten in a standard Master of Economics program?
It turns out it was not all about academics. “I learned a lot about pensions, both in theoretical and practical terms,” he says. “With the company visits and possibility of writing your thesis while working at one of Netspar’s partners, you see how things happen in real life, and of course, you are given a unique opportunity to network.”
As part of his thesis project, Gijs researched a possible win-win collaboration between pension funds and the banking sector. The main conclusion of this was that, in today’s market conditions, it is very attractive for pension funds to invest in the mortgages from banks. On the one hand, the banks maintain their customer relations, while achieving balance sheet reduction. On the other hand, the pension funds obtain a more optimal return on investment. “It could be very beneficial for pension funds, partnering with the banks, to gain control of the liquidity premiums,” he points out, “since pension funds could use the banks’ screening expertise and thus gain access to a category of assets with very attractive risk and return characteristics. You are already seeing an increase in activity in terms of transactions between banks and pension funds. A good example of that is the transaction between the health workers pension fund Pfzw and Rabobank, in which Pfzw assumed a portion of the risk for one of Rabobank’s loan portfolios.”

Your trip through China must certainly also be yielding new insights. What are you going to do once you are back in the Netherlands?
Gijs ponders this seriously for a moment. “It has definitely taught me a lot and expanded my horizon,” he says. “I have put off looking for a job until after my trip, but I know that I want to work in the pension industry. Due to the fact that, in my opinion, the industry is going to experience tremendous change in the next few years, I think it would be a great challenge to be part of that. I believe the pension industry needs an influx of more young people to make the pension system in the Netherlands future-proof, generation-neutral and more flexible.”